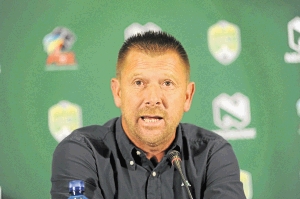 Since taking over from Dan Malesela three matches into the new campaign in August, Chippa United coach Eric Tinkler has won only two of eight matches he has overseen, with three defeats and three draws.

Chippa may be one of the relegation-threatened teams at the moment, with only 10 points in 11 outings, but Tinker feels they don't deserve to be where they are.

"When we look at our last five games, you see that we do not deserve to be where we are. It's that final third that I know all the coaches are complaining about. We are working on it at training to try and create those special situations so that players can understand the need for composure in those situations," said Tinkler.

"We cannot be saying that [poor finishing] week in, week out. People judge us as coaches purely on points not on performances, that's a harsh reality."

Dan Malesela has shut the book on Chippa United‚ and in the interests of finding closure does not want to even talk about his previous club any more.
Sport
3 years ago

However, the ex-SuperSport United tactician appears to be content about the club's defensive record since his arrival.

"We've only conceded 10 goals [in the league] all season. That was an area that we focused on immediately when I took over. That area is looking good. it is stronger and well-organised. But you cannot be complacent, you need to keep improving," stated Tinkler.

Chippa's attempts to escape the relegation danger will get even trickier as they face the side who's as desperate for points as them in the form of AmaZulu at Nelson Mandela Bay Stadium tomorrow (8pm).

"Right now it's a dog fight. It is not going to be easy at home. I have watched a few of their [AmaZulu] games. Confidence levels are a lot higher. We need to be ready for them."