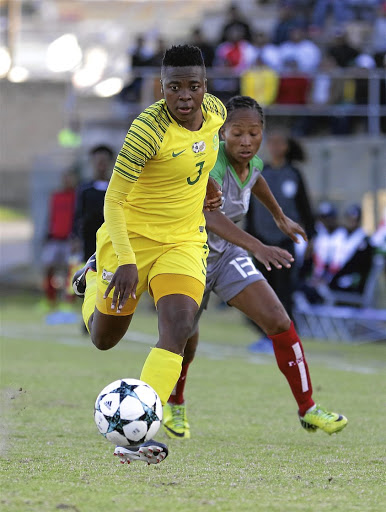 Leading up to their departure for the Africa Women's Cup of Nations in Ghana, Banyana Banyana coach Desiree Ellis always talked confidently about qualifying for their maiden Fifa World Cup.

More than any other day, it's in today's semifinal clash against Mali at the Cape Coast Stadium where Ellis's indomitable spirit and belief are needed.

A win will not only propel SA to the final on Saturday but will also guarantee their berth in next year's World Cup in France.

Banyana's all-important fixture against Mali kicks off at 8.30pm.

Thus far, Banyana have conceded only two goals in Ghana, both in the first half against Equatorial Guinea and Zambia.

Left-back Nothando Vilakazi has cautioned her fellow defenders against losing concentration early in their games. "We are not happy that we always concede early goals. It must end against Mali. In the game of football, it's always important to remain focused throughout the match. If we want to beat Mali, we must not let them score at all," Vilakazi said.

While reaching the final will see Banyana realise their primary goal of going to the World Cup, the defender insists they've also set their sight on winning the tournament.

"Yes, we know that if we beat Mali we qualify for the World Cup but we also have a dream to win this Afcon. We have never won this cup before, so we feel we have a great opportunity this time around."