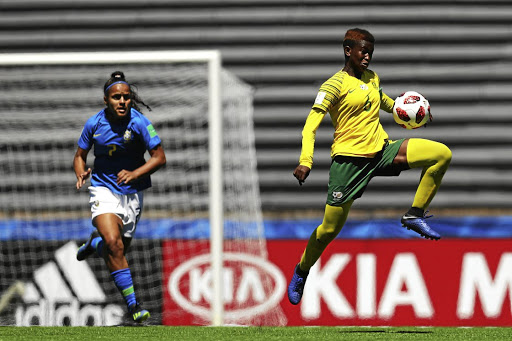 After raising expectations with a gallant display in their Fifa World Cup 0-0 opener against Mexico, the SA under-17 women's team flattered to deceive as they have now bombed out of the tournament in Uruguay.

That promise against Mexico was followed by two heavy defeats against Japan (6-0) and Brazil (4-1) respectively, which saw them finish bottom of the group with just a point.

As disappointing as it is that SA failed to qualify for the quarterfinals, Bantwana coach Simphiwe Dludlu still values the experience they gained from participating in the World Cup.

"For me, the game is always about winning and learning. it's never a loss, that's what I am taking from this World Cup. Experience, you do not buy it and you do not get it as a gift. You have to go through the processes," said Dludlu, who played as a defender before retiring in 2015.

"I am going back with 21 players that have learnt and become better. We have to keep fighting for excellence."

Despite their poor showing at the Fifa U17 Women’s World Cup in Uruguay where they failed to get out of the group‚ coach Simphiwe Dludlu says her ...
Sport
3 years ago

The coach foresees a bright future for her young troops, tipping them to eventually graduate to the under-20 and the senior national sides.

"The girls will be able to take all they've learnt here into their careers.

"Some will make it to the
under-20 and some to Banyana. One of the things I'm proud of is the girls grew in each and every game."

Bantwana's only goal at the global showpiece was scored by Zethembiso Vilakazi, making her the first South African woman to score in a World Cup.

This is because in the 2010 edition Bantwana did not score, while the under-20 and Banyana Banyana are yet to make their maiden appearances at their respective world cups.