Derby a defining moment for Solinas 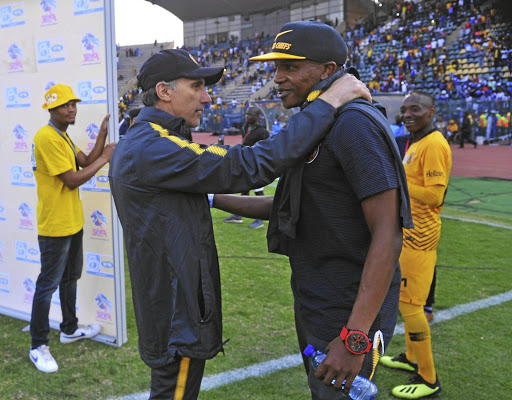 Giovanni Solinas faces what could be a career-defining Soweto derby on Saturday, but the Italian can perhaps count on Kaizer Chiefs' two records against Orlando Pirates as the giants meet at Moses Mabhida Stadium (3pm).

Chiefs have never lost to their arch-rivals in Durban, having emerged victorious in all four games that were played in KZN in the PSL era.

Amakhosi also have never lost a Knockout tie to the Buccaneers, and their last victory over Pirates came in the competition back in 2015, albeit on penalties.

Solinas's challenge, however, is that it has been downhill since, with Pirates dominating Amakhosi nonchalantly to have many predicting Saturday's result as a mere formality.

The Italian will be in charge of his 19th match, putting him four away from the record 23 that is the longest of his nomadic managerial career, which has seen him fail to last a full season everywhere he has coached.

Becoming the first Chiefs coach to lose to Pirates in Durban could heighten the tension that has been building around his regime, exacerbated by poor decision-making riddled with constant tinkering.

The two-week Fifa break will have allowed Solinas time to plan for a different approach after the disaster that was last month's league derby, which Pirates clinched 2-1 after coming from behind.

Solinas famously said sorry to the Chiefs supporters after that match. The 50-year-old has had a shaky start to his career at the club with seven wins, seven draws and four losses in all competitions.

A boost for Solinas is that playmaker Lebogang Manyama has returned from the elbow injury he suffered in a car crash. Manyama will look to pick up from where he left off before the injury as he looks to continue to be a key cog in the attack for the club.

His agent Maimane Phiri said: "Lebo is fine now and I think he should be OK to play but as you know that will be the decision of the coach. But in terms of fitness from that injury he has recovered."