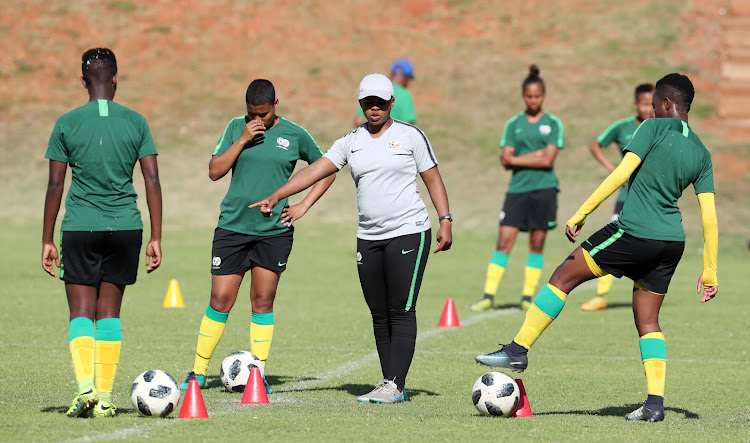 Despite their poor showing at the Fifa U17 Women’s World Cup in Uruguay where they failed to get out of the group‚ coach Simphiwe Dludlu says her South African national team charges learned some valuable lessons at the global tournament.

Bantwana exited the event in disappointing fashion on Tuesday night after they suffered a heavy 4-1 defeat to Brazil in Montevideo and they return home this week yet to taste victory at the World Cup after two attempts.

“We came‚ we saw and we learned a lot‚” said Dludlu after SA finished bottom of Group B with one point from three matches.

“To me the game is always about winning and learning.

"There is never a loss and that is what I am taking with me from this tournament.

"This is experience that you cannot buy or get as a gift from someone.

"You have to get through the battles and you must be in it to know what it feels like to learn and come back to tell the tale.

"It is not just my experience but for South Africa because I have a passion for the women’s game and its development.”

Dludlu said some of the players who played in the tournament will graduate to the U20 side and their experience will be vital for Basetsana coach Maud Khumalo.

She said some of the players even have the potential to play for Banyana Banyana.

“The girls will take this experience and move on with it to the U20 and some to Banyana Banyana.

"One thing that was on top of my list coming to this tournament was to gain experience of being in a World Cup and playing against good teams with good coaches.

“I also wanted this team to get better with each game where the players showcased their style of play and be brave.

"Tactically‚ we might have been beaten and all of that but one of the biggest thing I am proud of is that these girls grew with every game.

"I demanded consistency and professionalism.

"But I could not have asked them to perform miracles against Japan when they played against technically good team.”

The future remains uncertain for Dludlu‚ given the team’s poor showing.

But she said she still wants to continue working on developing youngsters.

“For me it’s going back home and getting a breather‚" she said.

"Then I will do my reports and look at the matches again on tape to profile everything that happened in the tournament.

"I have passion for developing grassroots talent and it will be about going back and unearthing that talent and start profiling players now.”