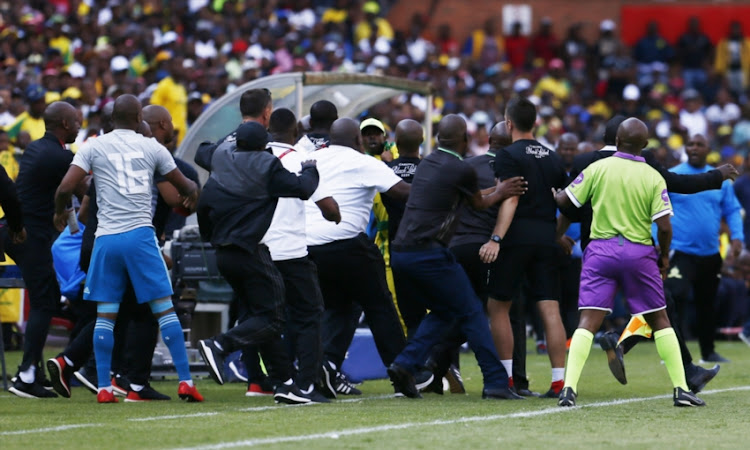 The Premier Soccer League (PSL) are investigating the skirmishes that took place between Orlando Pirates team officials and Mamelodi Sundowns security staff ahead of a premiership match at Loftus Versfeld almost two weeks ago‚ PSL prosecutor Nande Becker has said.

Sundowns have laid criminal charges against Pirates at Sunnyside Police Station for damage to property and assault on a security officer relating to the skirmishes and the alleged breaking of an emergency gate ahead of a 0-0 draw on November 10.

The South African Police Service (SAPS) VOC (Venue Operations Centre) commander from that game‚ Colonel Jabulani Mahlangu‚ has also confirmed that someone who appeared to be part of Pirates’ team security was not allowed into the stadium as they were carrying a licenced firearm.

Becker said that the fact that there is an ongoing police investigation does not mean the PSL have to wait putting into action their own probe.

“We are investigating‚ I am still waiting for statements‚ we have got video footage and things like that‚” Becker said on Wednesday.

“But there are still some things outstanding before I can decide where to go from here.

“If you would recall‚ [Downs coach] Pitso Mosimane was charged in a match against AmaZulu down in Durban [on September 16] for manhandling a security official. And criminal charges were laid there‚ and notwithstanding that fact we carried on and I prosecuted him.

“Yes‚ there may be criminals charges pending [in the Loftus case]‚ but that’s a criminal case and we’re dealing with an in-house PSL procedure.

“Once I’ve got the information I make a decision on who to charge and what to charge with.”

The team‚ on their arrival‚ apparently refused to enter through the normal door of the Loftus main stand to go to the change rooms‚ and instead broke through an emergency door‚ resulting in skirmishes with security officials.

Sundowns‚ apart from opening a charge with the police‚ also referred the matter to the PSL for potential disciplinary action.