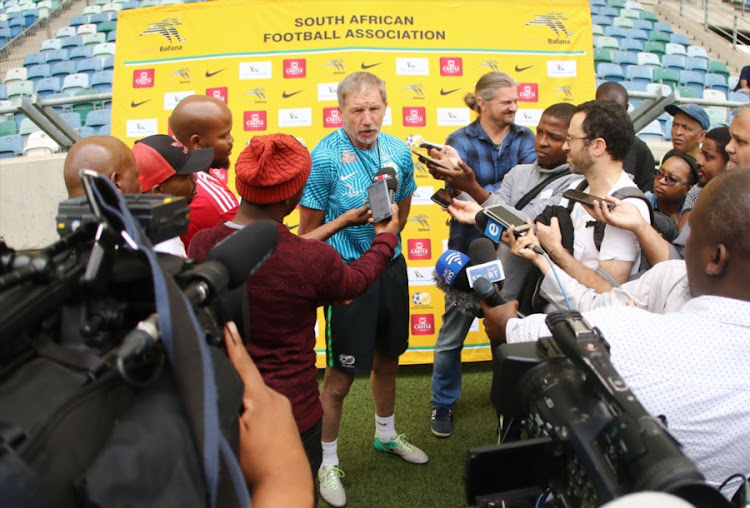 Bafana Bafana coach Stuart Baxter says it is vital that his team gets some preparations in before they take on Libya in their vital African Nations Cup qualifier in March.

But the Briton admits privately that there is little chance of organising a training camp or a friendly match outside of the window for international matches.

Baxter says that with so many players returning from injury in the period up to the game‚ Bafana require some sort of scrimmage to best integrate the players back into the team.

But FIFA rules do not require clubs to release players until the next international window‚ which is from March 18-27.

The game against Libya will likely be played on Friday March 21 or Saturday March 22 with South Africa needing to avoid defeat to ensure they qualify for the finals.

If Libya win they will go to the tournament instead of Bafana.

“The fact that there is three months to the game means we will have to be active between now and then because we are going to get some of our six or seven players back from injury.

"And so those (players) will need to be reintegrated into the team‚” Baxter said.

Bafana drew 1-1 with Paraguay at the Moses Mabhida Stadium on Tuesday night.

But he admitted later that would be difficult.

Premier Soccer League clubs have a packed programme this season and would likely turn down any request to release players for mini training camp or even Bafana training sessions outside of the international window.

Baxter is heading to London and France on Thursday to meet with players and their clubs.

The main focus of his trip is to meet with the coaching staff at Racing Strasbourg in France where Lebo Mothiba has made a strong impact this season.

The idea is to build a better relationship that might allow Mothiba to be released outside of the window if South Africa required him.