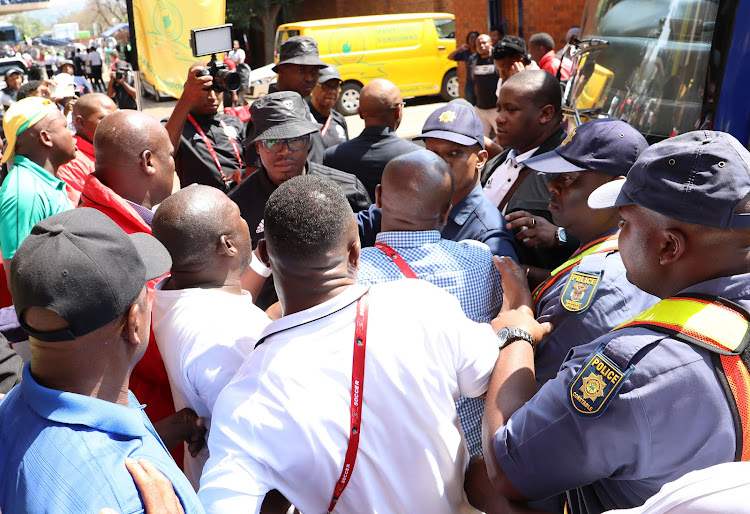 Sundowns and Pirates officials argues outside stadium during the Absa Premiership 2018/19 match between Mamelodi Sundowns and Orlando Pirates at the Loftus Versveld Stadium, Pretoria on 10 November 2018.
Image: ©Muzi Ntombela/BackpagePix

An alleged official who appeared to be part of Orlando Pirates’ team entourage at Loftus Versfeld when skirmishes broke out with Mamelodi Sundowns’ security officials was carrying a firearm‚ the ranking police officer on duty that day has confirmed.

Sundowns have opened criminal charges against Pirates at Sunnyside Police Station for damage to property and assault on a security officer.

Colonel Jabulani Mahlangu‚ the VOC (Venue Operations Center) commander of the Absa Premiership match‚ drawn 0-0 on November 10‚ told SowetanLIVE on Tuesday that he had received a report on the day of an alleged Pirates official who had been carrying a firearm.

“The information that I got was that there was a firearm. And then our [SA Police Service] colleagues went in there and confirmed that the firearm was licenced‚” Mahlangu said on Tuesday.

“That person seemed as if he was an official of Orlando Pirates.

“The police could not charge that person because the firearm was licensed. The only thing is that the firearm is not allowed in the stadium.

“On that basis the person was not arrested‚ but he was also not allowed into the stadium.”

Mahlangu said he did not know the identity of the person who was carrying the firearm.

“I did not ask the name‚ because the only information they gave me as VOC commander was that the firearm was legal and the person was denied access to the venue.”

“Teams always enter through the glass doors in the middle of the main stand at Loftus‚” Singh said.

“SuperSport’s cameras are also set up to capture the team arrival there.

“But when the team arrived then again they wanted to come through the other gate. That’s where that whole other skirmish happened.”

Asked what reasons Pirates appear to have for not going through the normal door‚ Singh said he believed these were umuthi-related.

“Everyone’e entitled to their own beliefs but we’ve got security protocols‚” he said.

Singh said Sundowns are investigating a report of a Pirates official who had a firearm.

“We got the report yesterday [Monday] that one of their security contingent was carrying a firearm and was removed‚” he said.

“Imagine that. There’s a guy who our security are trying to push out because they are doing their job and this guy is carrying a gun.”

Pirates’ administrative officer Floyd Mbele said he had no knowledge of any Bucs official who was in possession of a firearm at Loftus.

“You are telling me something that I don’t know‚” Mbele said.

“Because when you say a Pirates official‚ who is the official? Why don’t you name the official so that I’m able to deal directly with the allegation?”

He said the club would prefer to comment on the charges laid by Sundowns once the details of the case emerged.

“We don’t know – we haven’t been summonsed or served with papers. So to that extent there is no comment from us today.”