Sandilands open to offers from other clubs 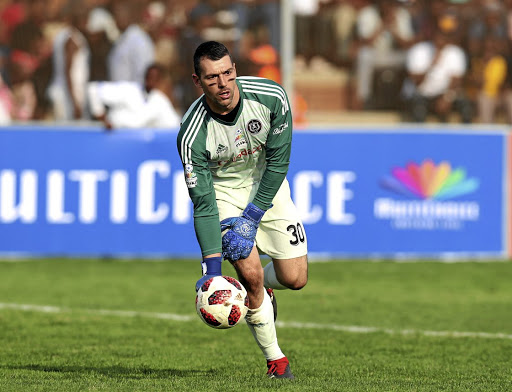 Out-of-favour Orlando Pirates goalkeeper Wayne Sandilands concedes he might consider leaving the club if Bucs are willing to release him.

Since his howler against Highlands Park in the opening league match of the season, Sandilands has not featured for the first team. The ex-Mamelodi Sundowns shot-stopper was last week left out of the CAF Champions League squad.

"At the end of the day my life is bigger than football. If the club is willing to release me, I will consider it," said Sandilands after his man-of-the-match display against arch-
rivals Kaizer Chiefs in the MultiChoice Diski Challenge (MDC) at the weekend.

"You never know what might come, the club will have to decide. At the end of the day I am contracted to Pirates, so the final decision will come from them," he said.

Sandilands did not hide his dismay about his Champions League squad exclusion. Siyabonga Mpontshane, Jackson Mabokgwane and newcomer Brilliant Khuzwayo got the nod ahead of him.

"It's hard. it's disappointing you know. But I maintain that God is in control of my life and destiny. I am submissive to Him. I will continue to serve where He needs me."

The 35-year-old's spell at Pirates has largely been characterised by blunders, resulting in the Bucs faithful crucifying him on social media.

"Mistakes happen in football. It happens to players all around the world, so I do not read too much into that. I won't lie to you, it's difficult. I do not go on social media."

The Benoni-born, Ekurhuleni, keeper's heroics in the MDC against Chiefs inspired the Sea Robbers to a 1-0 victory at Vosloorus Stadium.

Sandilands implied the reserve league was almost as competitive as the Premier Soccer League (PSL).

"Playing in the MDC is the closest thing you're going to get to real 90 minutes in a real game, in terms of pressure, you're playing for points against PSL opponents. The standard nearly matches Premiership," noted the keeper.