Mhlongo explains his absence at TS 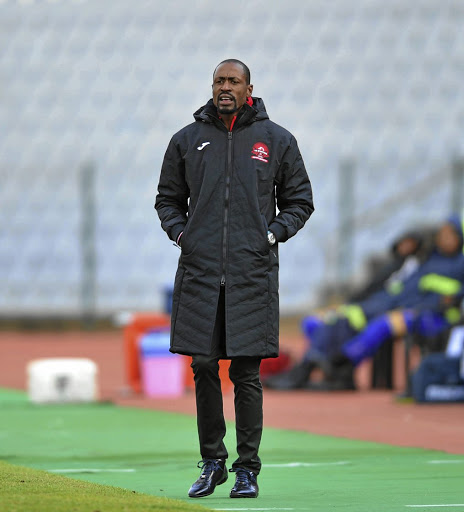 It seems as if TS Sporting coach Benson Mhlongo is not prepared to work with the club's technical director Sammy Troughton.

Yesterday, Sporting released a statement confirming that Mhlongo had not reported for duty since November 13. The club believes his decision to disappear "was triggered by our request made to him to work closely with Troughton".

Speaking to Sowetan, Mhlongo admitted he's been away from the club, citing the passing away of his uncle as his reason for his no-show.

However, the ex-Orlando Pirates deputy mentor refused to comment on whether he's willing to work with Troughton.

"I have been away because my uncle passed away, we have just buried him. I am still in Johannesburg. I cannot comment further on this because I have not seen the statement from the team. I do not want to speak about other people (referring to Troughton)," said Mhlongo.

Benson Mhlongo is adamant he is still the head coach of TS Sporting despite the National First Division (NFD) newcomers announcing that his assistant ...
Sport
1 year ago

Asked if he told the club about his bereavement, the Alexandra-born retired midfield hard-man indicated that the passing of his relative was a private matter.

"Ngiwu [I am] Njomane [his clan name]. I do not speak about funerals because it's private and personal. Please let me mourn in peace and stop asking me questions."

However, Sporting's statement said Mhlongo's agent "informed us through email that his client has taken a sabbatical leave and handed over all the properties of the team".

Having joined the Mpumalanga-based side from Pirates before the start of the season, Mhlongo had inspired Sporting to be among the pacesetters as they are currently third on the NFD standings.