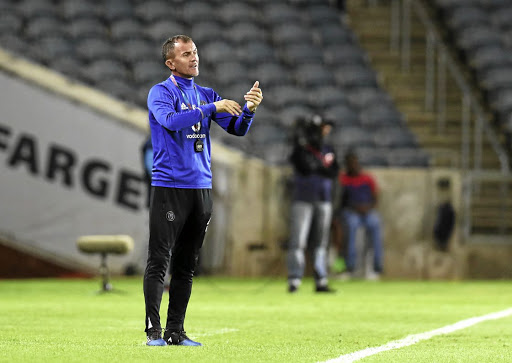 Since 2014 Orlando Pirates have not brought home any silverware.

Bucs's last cup success was their Nedbank Cup triumph four years ago while under the guidance of Serbian Vladimir Vermezovic, when they beat Bidvest Wits 3-1 at Moses Mabhida Stadium.

This was after they lost two cup finals to Platinum Stars in 2013, going down 2-1 in the Telkom Knockout and 3-1 on penalties in the MTN8.

However, with Sredojevic in his second season, Pirates appear to be a stable unit and are top of the Absa Premiership almost mid way through the new season.

They are also one step away from reaching the Telkom Knockout final as they take on rivals Kaizer Chiefs in the last four in Durban on Saturday.

Pirates also did reach the Caf Confederation Cup final under Tinkler, but lost to Etoile Du Sahel of Tunisia.

The former Bafana midfielder, however, was only in the job for a year and his successor, Ertugral, resigned live on TV just after five months after his side was humiliated 6-1 by SuperSport United in a league match.

Augusto Palacios took over on an interim basis before Jonevret stepped in the following year, but lasted a mere six months.

Sredojevic was announced as coach in August last year and has been at the helm ever since.

With the Bucs ship in calm waters, it could be their chance to dust off the trophy cabinet. In the transfer market, they've continued to be competitive with nine new signings before the start of this season. More importantly, coach Sredojevic has had enough time to implement his philosophy and bring results.

Over in Naturena, Chiefs have not had as many changes in their technical team.

Since their last cup triumph - a 1-0 win over Pirates in the MTN8 in 2014, former coach Steve Komphela was in charge for almost three years.

In that period, Chiefs won the league on two occasions, Nedbank Cup and MTN8.

When Baxter took over, some of his signings were established defenders such as Morgan Gould, Siboniso Gaxa and Eric Mathoho, as well as midfielder Siyabonga Nkosi.

The following year Chiefs further reinforced the team by re-signing Knowledge Musona, who had returned from Germany and Tsepo Masilela, who also returned from overseas.

But their signings over the past few years have been questionable. In 2016, they signed Ramahlwe Mphahlele, Keagan Buchanan, Enocent Mkhabela, Edmore Chirambadare, Michelle Katsvairo, Lewis Macha, Ryan Moon and Sibusiso Khumalo.

Of those signings, six are no longer with the club.

However, this season they have signed Khama Billiat, who's one of the best players in the league, Madagascan international Andriamirado Andrianarimanana and Ugandan left-back Godfrey Walusimbi.

Siphelele Ntshangase, Leonardo Castro and Kabelo Mahlasela were brought in during the January transfer window.

On paper, this year Chiefs have fared better in the transfer market than in the past few years.

Whether this is enough could be answered by winning the Telkom Knockout and end a four-year wait for a trophy.

But Pirates are just as desperate for silverware, which makes this an intriguing clash.