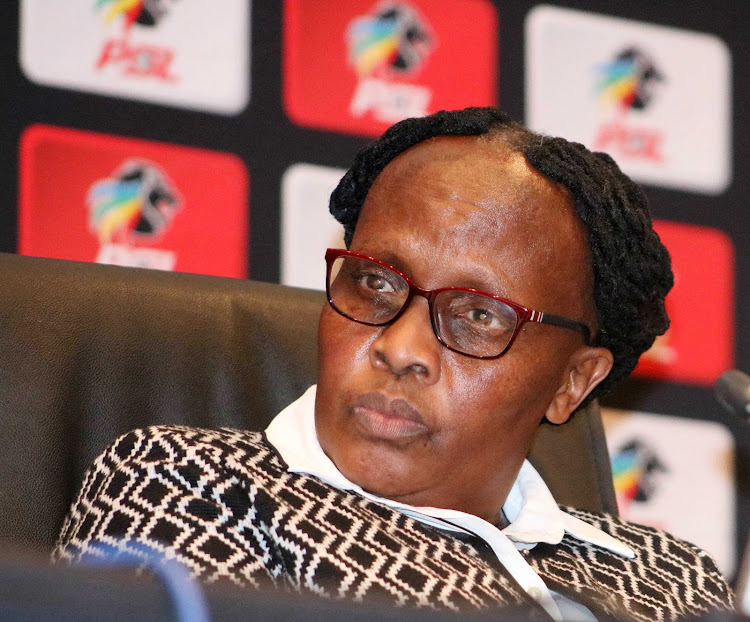 Mato Madlala says she will continue as acting CEO of the PSL‚ a position she has now held for three years‚ so long as she is asked to by her employers.

Sunday marked three years since Brand de Villiers left the PSL as CEO on November 11‚ 2015‚ and Lamontville Golden Arrows owner and chairwoman Madlala was announced as the acting holder of the position.

She stressed on Friday morning that she never put herself forward for the role‚ but was asked to fill it by her employers - PSL chairman Irvin Khoza and the league’s executive committee.

“Acting at the PSL was not my choice – I was asked to do that‚” Madlala said.

“And I gave my word that I would do that for as long as there was a need‚ or until we finalised what I was there to do‚ from the members who had asked me to act.

“So until they say it’s done – because I report to them – that would be the time.”

Madlala said she was not stretched by having to fulfill her PSL duties‚ plus two other fronts of her private businesses and Arrows to run.

“They have got their own budget to run the club.”

Khoza had told TimesLIVE reporters in November 2017 that a suitable candidate had been identified to fill the role full-time‚ but that they were tied up contractually elsewhere until February 2018.

Madlala said she had no knowledge why that never materialised.

“I wasn’t responsible for that so I won’t have a clue. I don’t know‚” Madlala said.

While it has been reported in the media that corporate governance laws state that acting positions cannot be held for more than six months‚ this was disputed by a legal expert consulted by SowetanLIVE.

Advocate Paul Hoffman SC‚ director of the Institute for Accountability in Southern Africa‚ said that an acting CEO position is less than ideal for various reasons.

“An acting CEO is in a very vulnerable position because they cannot do what they have to do‚ due to having to keep looking over their shoulders to polish the marbles with the right people in order to get to the holy land‚” Hoffman said.

However Hoffman said he was not aware of any law preventing a CEO position being held for a certain length of time.

“I’m not aware of a law that you cannot be an acting CEO for a long time. Such a provision would have to be in the PSL’s constitution‚” he said.

The PSL’s constitution‚ which is contained in the National Soccer League Handbook‚ does not specify a length of time that an acting position can be held.

Article 18 of the PSL constitution‚ dealing with the position of chief executive officer‚ simply states: “18.1. The Chief Executive Officer will be appointed by the Executive Committee on such written terms and conditions as it deems fit.

“18.2. The Executive Committee will be entitled to delegate any of its powers to the Chief Executive Officer.

“18.3. The Chief Executive Officer may delegate powers or assign duties and responsibilities to any employee of the League in terms of the schedule of delegated authority approved by the Executive Committee.”

A remarkable statistic is that Madlala has lasted longer in the PSL CEO hot seat in an acting capacity than any of her three permanent predecessors since 2011.

The last PSL CEO to keep the job for longer than three years was Kjetil Siem‚ for almost four years‚ from March 2007 to May 2011.

Since Siem‚ though‚ there has been a bewildering procession of incumbents.

Zola Majavu lasted four months as the Swede’s successor‚ from July to October 2011. Stan Matthews made a month more‚ five‚ from February 2012 to July 2012.

Cambridge Mokonyane was acting CEO for a year‚ then De Villiers stayed in the job a relatively marathon two years and five months from July 2013 to November 2015.