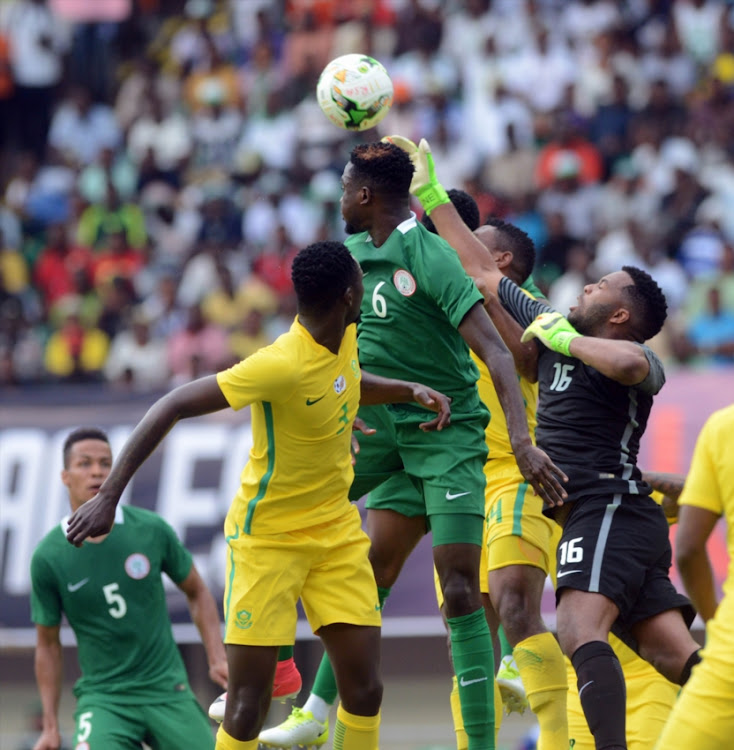 Bafana Bafana are preparing for the African Nations Cup tie against Nigeria on Saturday which is shaping up as one of their more important games in recent years.

They are up against a Super Eagles team that has changed in recent years and without more familiar names such as Jon Mikel Obi and Ogenyi Onazi.

TimesLIVE unpacks five talking points around the team and their coach Gernot Rohr ahead of the clash at the FNB Stadium.

Thirteen of Nigeria’s 23-man squad for the clash with South Africa are yet to reach double figures in terms of caps‚ with five players having featured in two or less games.

There are two uncapped players in goalkeeper Theophilus Afelokhai and striker Samuel Chukwueze who is tipped to make his debut at some point on Saturday.

The most capped player in the squad is captain Ahmed Musa with 78‚ the only player to have reached a half-century.

Between them the Nigerians have 352 caps (average of 15 per player) compared to 309 for Bafana Bafana (average 13 per player).

Bafana’s most capped star is Itumeleng Khune (90)‚ with the next highest the duo of Thulani Hlatshwayo and Thulani Serero (37 each).

Nigeria captain Ahmed Musa is without doubt the key player for the side with his wealth of experience and goal scoring acumen.

He has broken a number of records for the Super eagles of late‚ including becoming the first player from the country to score twice in a World Cup match (against Iceland in 2018) and the first Nigerian to net in two different World Cups (2014 and 2018).

With his pace and rocket shot‚ he can be a real threat‚ but the feeling might also be that if Bafana can neutralize him‚ then they can also take care of the less mobile attacking players in the side.

With no Odion Ighalo‚ who netted five of Nigeria’s seven goals against Libya‚ there looks a little less bite to their frontline.

After a period of instability on the coaching front‚ German Gernot Rohr has managed to hold onto the post for two years and he looks likely to extend his stay further when his team qualifies for the Nations Cup (either this weekend or in March against Seychelles).

Nigeria have tended to prefer home-grown coaches‚ with Rohr just the third foreigner to lead the team in the last 17 years after compatriot Berto Vogts (2007-2008) and the Swede Lars Lagerbäck (2010).

He has won 19 of his 31 games in charge of the Super Eagles‚ to go with six draws and six defeats.

Rohr‚ a former defender‚ started his playing career at Bayern Munich but performed mostly notably for French side Bordeaux‚ where he made over 350 appearances and later managed the team. He has been working in Africa for eight years with Gabon (2010-12)‚ Niger (2012-14) and briefly Burkina Faso (2015) before he joined Nigeria‚ so he knows a lot about the football landscape on the continent.

He also coached Tunisian club side Etoile du Sahel before that.

Nigeria are unbeaten in their last three matches since the World Cup in Russia and in that time they have scored 10 goals while only conceding two.

The last African side to beat them in a full international‚ not including African Nations Championship‚ was South Africa in their June 2017 win in Uyo when Tokelo Rantie and Percy Tau scored in a 2-0 success.

In fact‚ Nigeria have lost only two of their last 12 Nations Cup qualifiers‚ with the other defeat coming away in Egypt in March 2016.

There are plenty of tales of Nigerian players born in England who have switched allegiances to the African nation in the past‚ but one of their most exciting recent recruits is wingback Aina.

Brought through the Chelsea development platform‚ he is currently on loan at Italian Serie A side Torino this season and has been making great strides.

He represented England at every age-group level from Under-16 to Under-20‚ but threw his lot in with Nigeria last year and was handed a debut days after gaining his passport.

He was surprisingly left out of the World Cup squad for Russia having played a large role in the build-up‚ and featured in both games against Libya last month.

He will be hoping for some game-time on Saturday to test Bafana with his mazy runs from the fullback position.