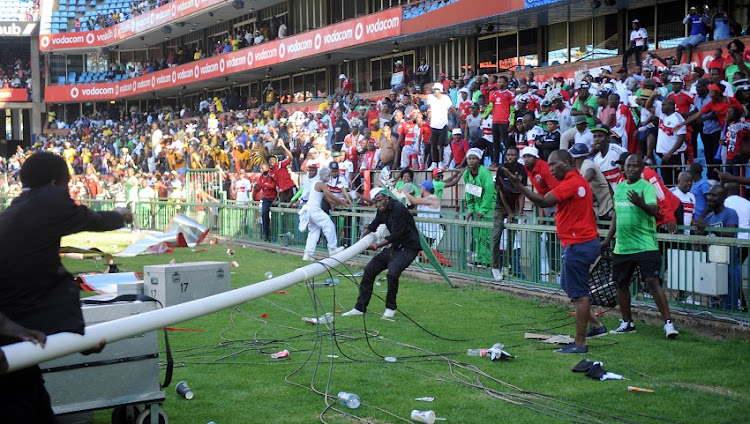 It's a fixture that over the years has captivated the country with eye-catching, flowing football.

But the clash between Mamelodi Sundowns and Orlando Pirates is now rapidly degenerating into a festival for moronic thugs.

Discussions in the days after Saturday's 0-0 drawn match at Loftus Versfeld have revolved around off-the-field controversy and hooliganism, backed by propaganda-like statements from either team seeking to blame the other.

Whatever the truth, this is one match that, should we allow it to lose its lustre as a spectacle of on-field drama, excitement and goals, SA football would be on a dangerous path.

Statistics show Saturday's draw was the first between the teams in four years, and the first without a goal in 14 games, dating back to March 2012.

It's one match where, after watching, fans went home feeling they had got their money's worth, something you can't always boast about for many local matches.

But ugly pictures that emerged out of Loftus tell us this match is fast turning into a life-endangering experience.

The pandemonium of February last year, when Pirates fans ransacked the same stadium as their side were subjected to a heavy beating, was clearly not a one-off event.

It was followed by the beating of a Sundowns fan, who required hospitalisation, months later at Orlando.

Now a Sundowns fan was so overcome by rage that he got onto the pitch and accosted Rulani Mokwena, the Pirates assistant coach, right in the dugout.

A verdict has been reached by the Premier Soccer League’s disciplinary committee against Orlando Pirates for the club’s role in the pitch invasion ...
Sport
4 years ago

Reports suggest Mokwena may have gesticulated as Sundowns fans sang a denigrating song in his name.

But nothing justifies a fan coming for him in that manner.

The Mokwena incident was preceded by other off-field matters that sowed tension before kickoff.

Videos of Sundowns and Pirates officials exchanging expletives over parking slots and entry points have emerged, while some among us have sought to fuel the fire by shamelessly pointing fingers and even regurgitating footage from previous events that had nothing to do with Saturday.

It's all petty, and distracts from exactly why thousands have, over the past few years, marked the fixture as a must-attend event.

Now you may wonder if your life is worth a football match!

The truth is such incidents have not been adequately dealt with by those in authority. No one was arrested for the February 2017 commotion, even as clear footage showed criminals masquerading as fans running amok, beating securing guards and photographers, stealing and damaging broadcast equipment.

We've somehow become used to the sad story of hooliganism at our games.

What we haven't been accustomed to, however, is this kind of barbarism fueled deliberately by club officials.

Both Sundowns and Pirates employees could have behaved better on Saturday. They now need to be reined in, irrespective of whether their club's president is the richest man in the country, or whether their chairman also chairs the PSL.

How the league deals with Saturday's commotion will have far-reaching ramifications for the Downs-Bucs fixture which, for years, had been a model of on-field entertainment that kept us coming back for more.

I will skip the next one, thanks!