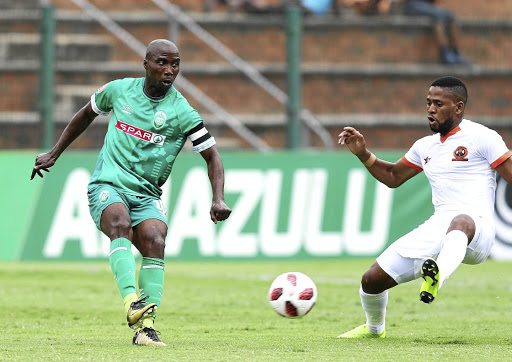 Siyabonga Nomvethe may be retiring at end of the season but he is still a valuable player for AmaZulu as they're embroiled in a dogfight to move away from the relegation zone.

Having confirmed in September that he would hang up his boots at the end of this campaign, Nomvethe started his first match of the season when he captained Usuthu in their 0-0 home stalemate against Polokwane City at the weekend.

While he assured Nomvethe was still much in his plans this season, AmaZulu coach Cavin Johnson is mindful that the club must use the veteran striker wisely.

"Bhele [Nomvethe] had been waiting on the wings for a while. We have to be careful how we use him because he's still important to the cause.

"We managed to bring him in after a long time," Johnson said of Nomvethe. "He has to be nursed so that he can give his best and leave a great legacy. Being his first start of the season today [he played only nine minutes in his first game of the season against SuperSport United in August], I think he did a good job."

Veteran AmaZulu FC striker Siyabonga Nomvethe has disclosed that he is using the current campaign to wind up on his illustrious 21-year professional ...
Sport
3 years ago

Before they were docked six points, AmaZulu had a promising start to the season, managing to hold defending champions Sundowns to an exhilarating 3-3 draw sometime in September.

However, Usuthu have since found themselves bottom of the table.

The Durban-based side lost six points after Fifa ruled that the club's decision to terminate Namibian-born player Phinheas Nambandi's contract in 2014 was unlawful.

Making Usuthu's fate even trickier is that three of their five matches before the end of the year are away to Highlands, Chippa and Leopards.