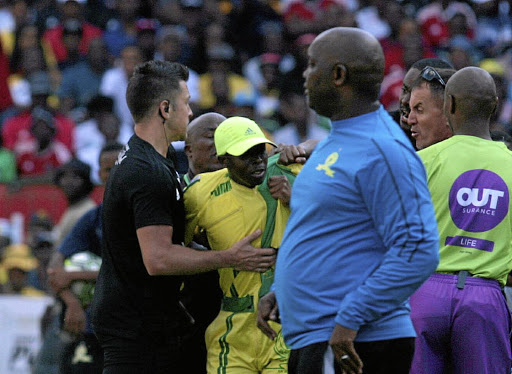 A fan clad in Sundowns colours is seen remonstrating with Orlando Pirates officials while Sundowns coach looks on during the tense match between the sides at Loftus Versfeld on Saturday.
Image: Veli Nhlapo

The fan who attacked Orlando Pirates assistant coach Rulani Mokwena during Saturday's tempestuous Absa Premiership match against Mamelodi Sundowns has been arrested, the PSL has confirmed.

A fan clad in Sundowns colours appeared to attack Mokwena right on the Pirates bench before being pushed back by club officials and security, leading to a full-blown melee between the two benches as emotions ran high in the 0-0 drawn clash at Loftus Versfeld.

The attack on Mokwena, who used to work for Sundowns, was one of four off-the-field incidents that marred the drama-filled match.

It all started outside the stadium when Pirates' team bus arrived and allegedly forced its way and parked in the bay allocated to Sundowns - a space allocated to coach Pitso Mosimane, at about 1.30pm.

"I found Pirates' bus parked where I park? They parked in my stadium, in my home. I found them parked in my space. What is this? I mean, really guys let's be honest, this is Loftus, it's not Orlando Stadium. I parked outside; is that a commotion?" said Mosimane, refuting claims that Sundowns blocked the visitors' bus.

In pictures posted on social media, some Pirates officials could be seen trying to use the emergency gate instead of the main entrance, with claims that this had led to a scuffle.

But the biggest talking point was when a Sundowns supporter confronted the Tshwane side's former assistant coach, Mokwena.

It appears that Mokwena used a hand gesture to dismiss the home supporters when they jeered him, which led to the fan confronting him on the bench.

"I saw one yellow person [a Sundowns supporter] with a lot of black and white [people dressed in Pirates colours], so I can't let a yellow be swallowed. I must protect this yellow, and unfortunately I'm the nearest one," explained Mosimane.

League spokesperson Luxolo September condemned the incident, but refused to be drawn on suggestions that security was breached.

"We can't cast any aspersions whatever happened, so let's get the [match] report [to take the matter forward], but the one aspect of it is that what happened is unacceptable," September told Sowetan.

Sundowns could face charges, including of failing to provide adequate security.