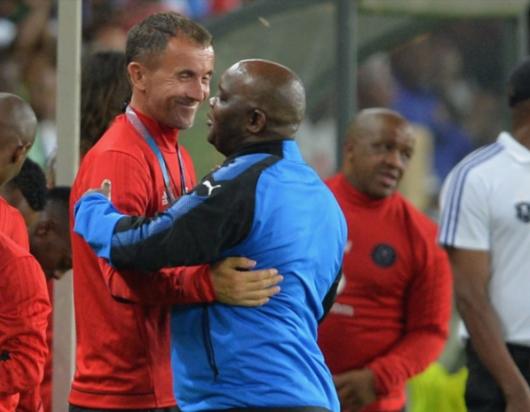 Mosimane’s vote of confidence came just days after former Sundowns player Bongani Zungu‚ who now plays for Amiens in Ligue 1 in France‚ controversially took to Twitter and insinuated that Pirates assistant coach Rulani Mokwena was the real boss at the premiership league leaders.

“I have big respect for Micho (Sredojevic)‚ I come far with Micho‚” said Mosimane.

“I have known Micho for the last 16 years. Micho has helped me a lot.

‘‘He was my encyclopedia when I recruited (goalkeeper) Dennis Onyango at SuperSport United.

“Micho is one of the top five coaches in Africa.

“So all these smaller things and mind games they don’t mean a lot. Micho has won championships… so many.

“We are too bigger than small‚ petty things.”

Sundowns played to a goalless draw with Pirates at Loftus at the weekend.

It may have been the first goalless draw between the Orlando Pirates and Mamelodi Sundowns in seven seasons but this one will be remembered more for ...
Sport
3 years ago

Orlando Pirates coach Milutin Sredojevic says he would have slapped Bongani Zungu if the Bafana Bafana midfielder was one of his former players and ...
Sport
3 years ago
Next Article