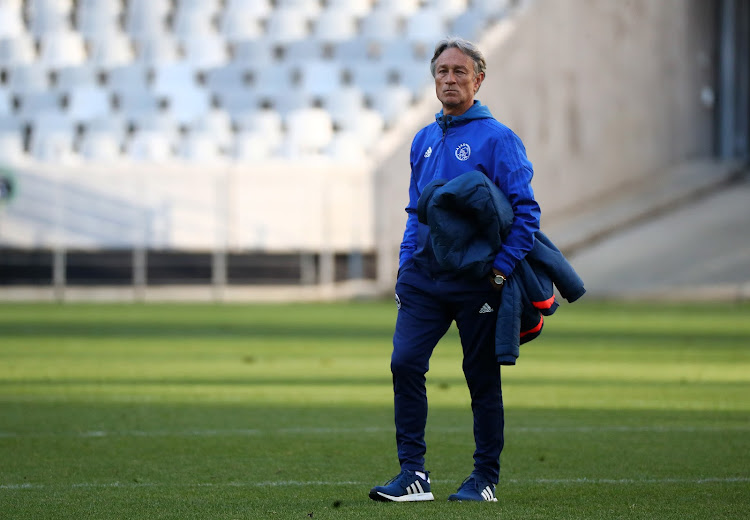 The Turkish coach Muhsin Ertugral was in charge of Ajax Cape Town when they were relegated in May 2018.
Image: Chris Ricco/BackpagePix

Ertugral, who oversaw the club’s relegation from the Absa Premiership last season, handed in his resignation after a 2-1 loss at Witbank Spurs on Saturday left Ajax in mid-table with more than a third of the season gone.

“We wish Muhsin well in all his future endeavours and thank him for his efforts over the past 11 months," read a statement from the club.

"His commitment to the club is unquestionable especially when he offered to stay on at the club and help the team in their quest be promoted back to the Absa Premiership,” said Ajax chief executive Ari Efstathiou added.

"The club have said they will make an announcement on a new coach “in due course”.

With a heavy heart
I am leaving Ajax Cape Town, the club that i have always a bond with my heart and soul.
First time in my career I have worked in NFD league after lifelong endeavoring a career. My gratitude for these great club and a unique model in international and SA..1/2

It was very important to continue after the tragic situation from last season to find a common ground to bring club back where it belongs,I believe it’s time to part ways will be beneficial for the club and myself.
To all the fans thank you for your support.

Ajax have won just four of their 11 matches so far this season as the side seeks to make an immediate return to the top-flight.

Ertugral had taken over the side from Stanley Menzo in December last year, and although results improved, could not lead them away from the drop-zone.

They looked to have qualified for the relegation play-offs before what turned out to be an effective seven-point penalty for fielding an ineligible player in striker Tendai Ndoro sent them to the foot of the table.

Ertugral is a veteran of the South African footballing scene having coached most notably Kaizer Chiefs, but also Orlando Pirates, Lamontville Golden Arrows, Mpumalanga Black Aces, as well as four spells with Ajax. Click here to edit this text.

Tickets for the Telkom Knockout Soweto derby semifinal between Kaizer Chiefs and Orlando Pirates in Durban on Saturday‚ November 24 have sold out‚ ...
Sport
3 years ago
Next Article