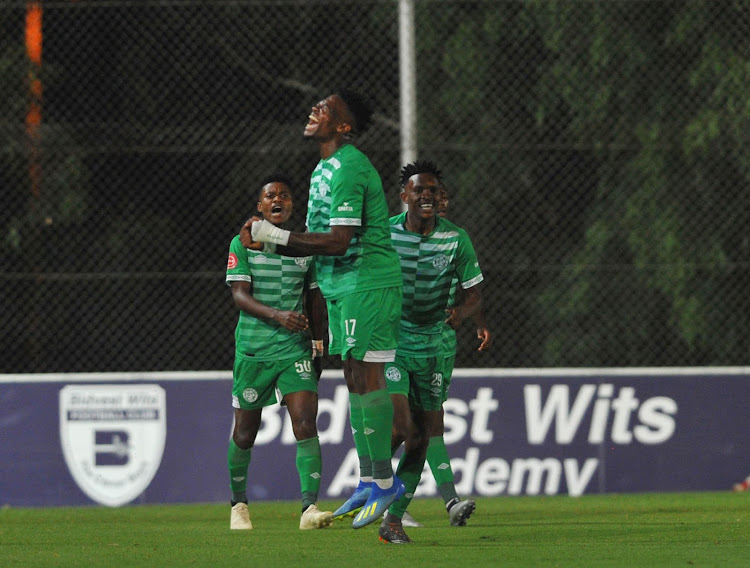 A 10-man Bidvest Wits side spurned a golden opportunity to go top of the log when they surrendered a 1-0 lead as Bloemfontein Celtic smashed and grabbed a 2-1 win.

Wits had the chance to go top on goal difference after Haashim Domingo's rather elaborate 57th minute freekick.

However, Steve Komphela's side are made of sterner stuff and through Tshegofatso Mabaso's 78th and 85th goals, collected their sixth win in 10 matches.

Despite their off the field issues, Celtic are a force to be reckoned with while Wits had Robyn Johannes sent off.

The sides were evenly matched and for units that have the best defensive records in the league, they regularly caught each other short when they went forward.

Wits were unusually jittery at the back for a side that only conceded four goals in 10 games.

Johannes, Buhle Mkhwanazi and S'fiso Hlanti all had three yellow cards going into the game while Thulani Hlatshwayo was suspended.

This partially explained their malice in committing to 50/50 tackles. Ndumiso Mabena and Victor Letsoalo exploited this frailty as best they could.

The latter forced Wits keeper Darren Keet into a good 32nd minute save while the former caused endless problems with his darting runs.

Celtic's best chance of the half came from a 17th minute Kabelo Dlamini freekick that Keet tipped over the bar.

Keet had conceded the set-piece a minute earlier after he clattered into Letsoalo outside the box. Wits weren't passengers in the half and posed their own questions.

Simon Murray was the headache and nearly caught Celtic keeper Patrick Tignyemb off his line with a 34th minute shot from just inside his own half.

Domingo also forced a save from Tignyemb in the 27th minute but the hosts didn't have their visitor's precision.

They matched them for endeavour but in the second half, the hosts were sucker-punched.

They did take the deserved lead through Domingo but the slower second stanza pace played into Celtic's hands.

They were content to absorb pressure and strike on the counterattack. Mabaso's first goal from the penalty spot was a result of following up a thunderous shot that had the beatinh of Keet, but not the crossbar.

Johannes saw it fit to bundle him off the ball but Victor Gomes not only sent him off, but awarded the spotkick.

Johannes's absence was immediately felt when Mabasa latched onto a neat pass to complete his brace.

Wits though fought for the point and Vuyo Mere and Mxolisi Machuphu forced a double save from Tignyemb in injury time but the men in green weren't about to be denied.