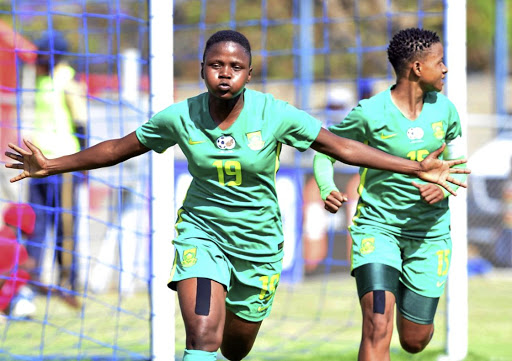 In consoling her best friend and Canberra United teammate Rhoda Mulaudzi after her Banyana Banyana exclusion, vice-captain Refiloe Jane believes a player's success cannot be determined by the national team.

"My message to her is that she must continue to work hard. Your success cannot be determined by the national team.

"She's been doing well for our club [Canberra], she's important for the club and that should be a motivation for her," said Jane who's part of the squad.

Jane and Mulaudzi joined Canberra of Australia simultaneously in August.

The pair hit the ground running at their new club, scoring three goals between them in their first two matches - with the latter netting two.

However, Mulaudzi's impressive form in Australia did not convince Banyana coach Desiree Ellis, leaving out the Venda-born striker for the African Women's Cup of Nations squad.

"I left her in Australia. I cannot say she's disappointed but I know she was looking forward to the tournament," noted Jane.

The Banyana deputy captain admitted that as overseas-based players, they must be the ones to ensure Banyana do well in Afcon.

Van Wyk positive they will qualify
Sport
3 years ago

"Playing overseas comes with a different responsibility. We must show that we have gained some experience from the best leagues in the world.

Yes, we are a team, but I expect more from us as players who are playing abroad."

Banyana depart today for Ghana, where the African senior tournament for women will be played from November 17 to December 1.

Ellis's charges are in GroupB alongside defending champions Nigeria, Zambia and Equatorial Guinea, who were reinstated in the tournament after appealing.

Equatorial Guinea's spot was initially given to Kenya after CAF had nullified their qualification for fielding an ineligible player.

But on Wednesday, the continent's football governing body confirmed that the Equato-Guineans had since been successful in their appeal and will participate.

Kenya have written to the CAS to appeal the decision to reinstate Equatorial Guinea.