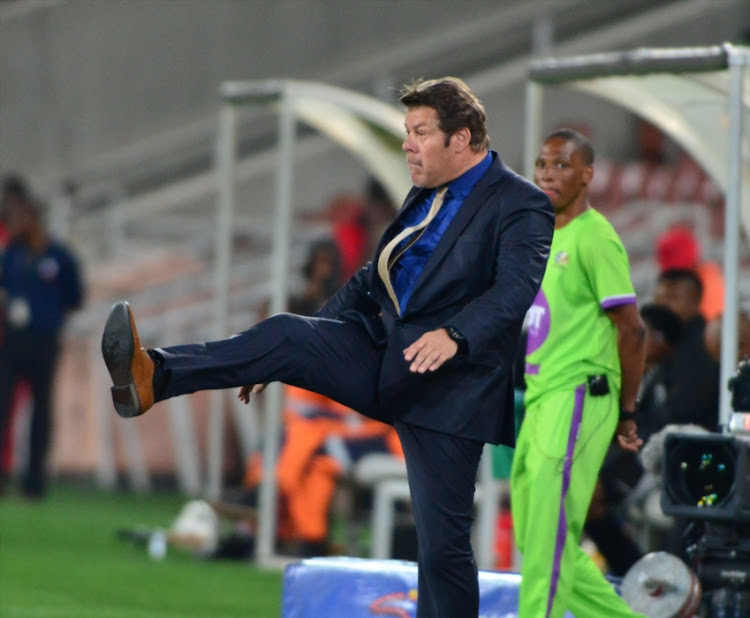 Free State Stars may be forced to not give priority to the Caf Confederation Cup if their position on the Absa Premiership standings does not improve in the coming few weeks‚ coach Luc Eymael has said.

Speaking after their 3-1 loss to Mamelodi Sundowns at Loftus on Wednesday‚ which has left Stars in eighth position with 13 points from as many matches‚ Eymael said he will have a meeting with the board after the next two games to assess their situation.

Stars have only two games left this year‚ both at Goble Park‚ against SuperSport United on Saturday‚ then Orlando Pirates on December 11.

“I would like to play Caf Confederation Cup at 100 percent but I know with these kind of results that will probably not be the case‚” Eymael said.

“I will have a meeting with my board after the game against SuperSport United and they will tell me if we take the Confederation Cup seriously or not because they are worried about our position in the league.

“What can we do? It is sad to fight to be in the top six and win the trophy for the first time in 24 years [last season in the Nedbank Cup] and not to take the Caf competition seriously.

“But I will understand if my board ask me to focus on the league. I will respect that decision because you don’t want to be in a position that some teams in South Africa found themselves in‚ in the past‚ where they were fighting on the continent and doing very badly in the league.

“We threw important points away against AmaZulu‚ Cape Town City‚ Golden Arrows and Polokwane City. There were situations in those matches that did not go our way and now we are on 13 points.

“I would like to take Caf seriously but it means I will have to beat SuperSport United and Orlando Pirates so that we are on 19 points. From there I think they will authorise for us to take the competition seriously and if we don’t get it they will ask me to focus on the league.

“If they say focus on the league‚ I will have to respect their decision because I am an employee.

“I am not happy with the number of points that we have collected now. We must collect three points on Saturday.

“If we had 17 or 19 points I think they would allow me to play [on the continent] because this season you will not need 30 points to be safe. I think this season even with 25‚ 26 or 27 points you will be safe.”