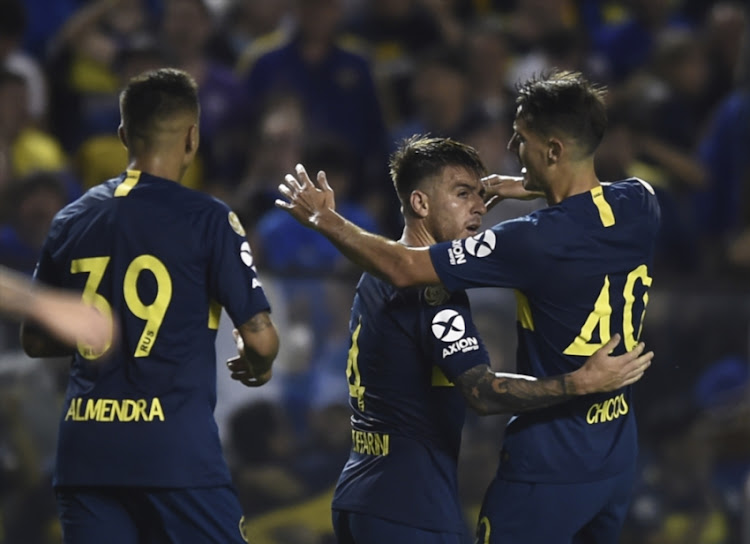 Julio Buffarini of Boca Juniors celebrates with teammates after scoring the fourth goal of his team during a match between Boca Juniors and Tigre as part of Superliga 2018/19 at Estadio Alberto J. Armando on November 3, 2018 in Buenos Aires, Argentina.
Image: Marcelo Endelli/Getty Images

Never before have the biggest clubs in Argentina and eternal enemies Boca Juniors and River Plate from Buenos Aires met in the Copa Libertadores final … until now.

On Saturday‚ they will meet in the first leg of the final of the Copa Libertadores‚ South America’s most prestigious club tournament‚ in what is regarded as one of the fiercest rivalries in world football at Boca’s La Bombonera Stadium.

The second leg will be held at River’s Monumental de Nunez on November 24 and in both legs there will be no away for fans to avoid the ugly scenes that have characterised this occasion for more than 100 years.

Boca-River is a seismic and high-octane derby between sworn rivals from the same city that divides the whole country and possibly the continent‚ and temperatures always reach boiling point whenever they meet.

It is simply known as the ‘Superclásico’‚ because just ‘Clasico’ does not even begin to do justice to it.

World sport has seen intense rivalries such as Rangers and Celtic’s Old Firm derby in Glasgow‚ Barcelona and Real Madrid in Spain‚ Inter and AC in Milan‚ United and City in Manchester‚ the New York Yankees and Boston Red Sox in the baseball in the US and Muhammad Ali against Joe Frazier in boxing.

But event these have not evoked the spine-tingling emotions quite like Boca and River who are followed by more than 70 per cent of the entire Argentinean population. The country will literally come to a standstill over the two legs of the two meeting in a continental cup final for the first time.

To reach this stage River Plate overcame Brazilian club Gremio in the semifinals while River beat Palmeiras in Sao Paulo.

They have met on 24 occasions in the Libertadores before‚ including semifinals in 1978 and 2004‚ but never with the stakes so high and the entire country can almost feel the tremors already.

I have never been to Argentina but those who have been fortunate to be inside the deafening and bouncing Boca’s La Bombonera or River’s Monumental de Nunez have described the experience as once-in-a-lifetime.

It is always a sold-out affair with tickets on the black market fetching thousands of Argentinean pesos.

So why do they hate each other so much?

According to a research by Adam Shergold of the Daily Mail and freelance journalist Robert Kidd‚ the story of the ‘Superclásico’ is based on geography and social class.

Boca are from the colourful but grimy La Boca port area of Argentina’s capital and they see themselves as the working-class team of the people.

At a match in 2012‚ cheeky River fans floated a giant inflatable pig wearing a Boca shirt above the away section at the Monumental.

The talking is almost over‚ Argentina‚ South America and anyone who loves the game of football around the world will interested in what will be unfolding at Boca’s La Bombonera on Saturday.

It is Boca and River in the Copa Libertadores final.