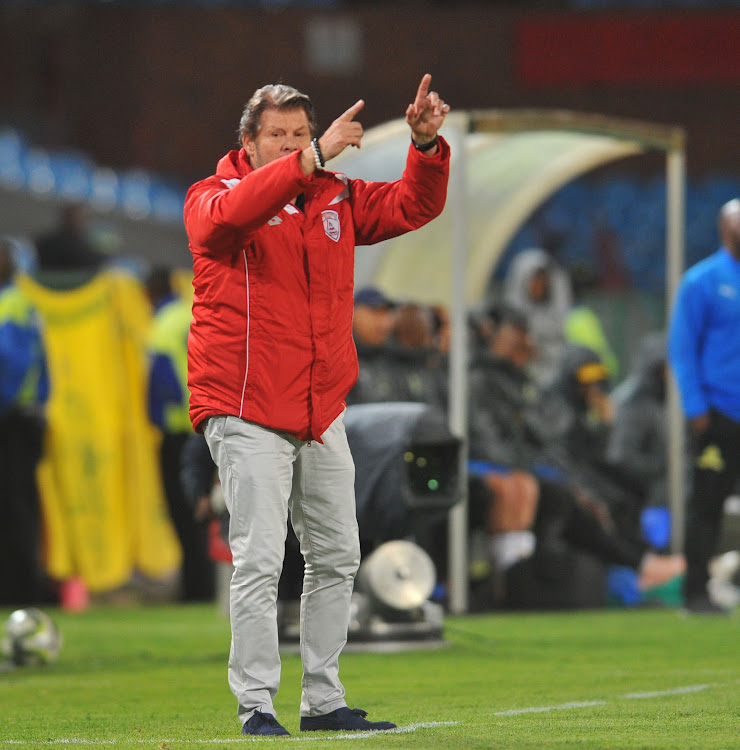 Free State Stars head coach Luc Eymael found himself caught on the wrong side of the law.
Image: Sydney Mahlangu/BackpagePix

Free State Stars coach Luc Eymael has been fined R100‚000 suspended for 24 months for his failure to address the media following his team’s 2-1 Absa Premiership defeat to AmaZulu at King Zwelithini Stadium in Durban three months ago.

The PSL confirmed on Thursday that the Belgian‚ whose team are struggling to repeat the performances of last season‚ has been punished for his conduct in Durban.

“The respondent [Eymael] is sentenced to a fine of R100‚000 suspended in its entirety for a period of 24 months on condition that during the period of suspension‚ the respondent is not found guilty of failing to ensure the attendance of any post-match interview as stipulated in the complainant’s media manual‚” read the PSL sanction.

The lean sentence might have been motivated by Eymael having reached a plea bargain agreement with the PSL after he admitted that he made a mistake for not attending the post-match briefing after his team’s defeat.

Eymael had been expected to defend his conduct after he had told SowetanLIVE in August that he was extremely sick with flu on the day of the match and decided to immediately leave the stadium when he saw no-one in the corridors where he thought the media were supposed to be waiting to speak to him.

“I actually went to the corridors looking for the print media guys but I didn’t see you there‚” Eymael told SowetanLIVE in August.

“So what I had to do? Cry after you or wait for you like a foreman in the corridor?

“But for me to wait in the corridors for you‚ I can’t because I was sick. I had 39 degrees Celsius temperature.”

But the Belgian’s explanation did not correspond with that of his former assistant‚ David Vilakazi‚ who had to face the print media that day after Eymael’s sudden disappearance from the Umlazi venue.

“I don’t know whether he was not informed that he must come for the media interviews here‚” said Vilakazi when asked about Eymael’s whereabouts at the time.

“I was also surprised when I was called to come in his place. I thought he was still around.”

Free State Stars coach Luc Eymael has defended his failure to show up at a mandatory post-match press conference after his team’s 2-1 league defeat ...
Sport
3 years ago

Free State Stars coach Luc Eymael has been charged by the Premier Soccer League for failing to attend a post-match interview at in an Absa ...
Sport
3 years ago

Controversial Free State Stars coach Luc Eymael is set to incur the wrath of the Premier Soccer League’s Disciplinary Committee after he failed to ...
Sport
3 years ago
Next Article