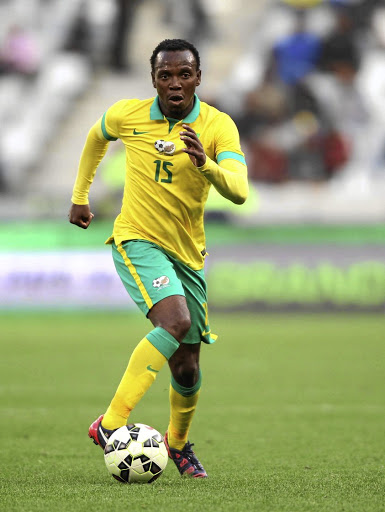 Stars of Africa Academy boss Farouk Khan hopes that the national team ban on May Mahlangu will be lifted after fellow outcast Thulani Serero was handed a second chance with Bafana Bafana.

Serero was surprisingly named in Bafana's 23-man squad to take on Nigeria in Afconqualifier on November 17.

The Holland-based attacker, who plays for Vitesse, was exiled from the team after he had suggested he would only honour a call-up if he plays.

Mahlangu had a similar transgression as he was banished in 2016 after declining a call-up, citing fatigue.

"May is playing regularly at his club and is doing well, so I think he is one of the players who deserves to be given a chance in the national team," Khan said of the Secunda, Mpumalanga-born Mahlangu.

"I know May and he is dying to contribute to Bafana but there is not much he can do, all he can do is to continue to work hard. I do hope something can be done to bring him back in the fold ... he has been out in the cold for too long."

May Mahlangu makes unexpected switch from Romania to Bulgarian champions

Bafana Bafana star May Mahlangu has made an unexpected switch from Romanian side Dinamo Bucharest to Bulgarian champions Ludogorets Razgrad‚ his old ...
Sport
3 years ago

At the time of his ban, Safa clamped down hard on Mahlangu as the organisation announced its decision, with then CEO Dennis Mumble saying "we will not tolerate an individual who does not take national call-ups seriously".

Although Khan did not agree with his decision, he feels the Ludogorets Razgrad (Bulgaria) player deserves forgiveness.

"I wasn't in favour of his decision not to come but I think we have to move forward now and not continue to punish him," Khan said.

Mahlangu, 29, last played for Bafana in a friendly against Mozambique two years ago.