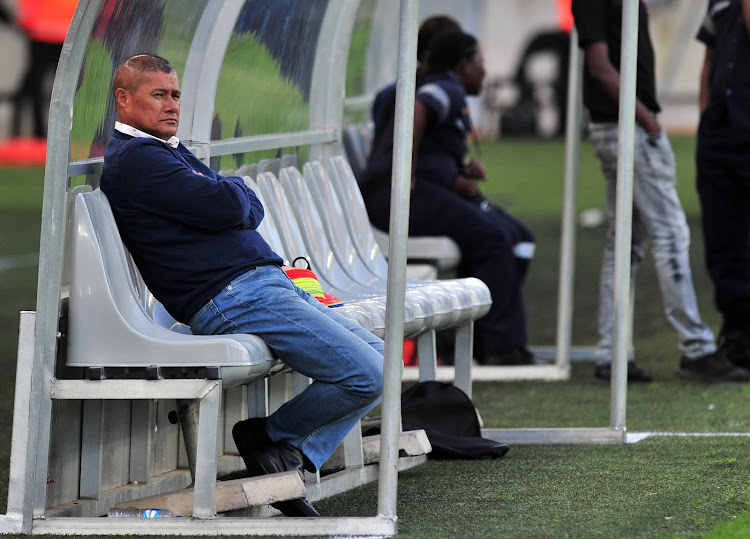 AmaZulu coach Cavin Johnson cuts a disheartened figure as he remained on his bench even after the final whistle during his team's 3-1 Telkom Knockout quarterfinal defeat against Orlando Pirates at Moses Mabhida Stadium in Durban on November 3, 2018.
Image: Samuel Shivambu/BackpagePix

Showboat all you want but do it going forward.

That was the message from AmaZulu coach Cavin Johnson who saw his side sliced 3-1 by Orlando Pirates to slide out of the Telkom Knockout tournament during the quarter-final stage on Saturday night at Moses Mabhida Stadium.

When the Buccaneers felt the result was in the bag after breaking the back of Usuthu via goals from Thembinkosi Lorch (brace) and Xola Mlambo‚ the men in black and white started toying with the warriors in green and gold.

Johnson said he was all for showboating but called for it to be done constructively.

“Probably if I was winning the game I’d also do it. It is an African thing and I have nothing against.

"But‚ in some moments players will get upset when you do that and can get a very bad injury because naturally in football ‚ the football we watch‚ the football we aspire to play like everywhere else in the world it is not done‚” said Johnson.

"But‚ I accept it. I’m not going to condone it. But‚ at the same time I’d like you to do it against TP Mazembe when you’re leading because we don’t show that enough to the world.

“So‚ ja we’ve gotta be professional about it as well‚ showboating is one thing I like to do. I encourage my players to do that as well but showboat going forward.

Johnson has decried the defensive deficiencies of his AmaZulu who were bundled out of the tournament by swashbuckling Pirates.

“It was a good for football. For 120 minutes we did justice to coming out and playing‚ this being a cup game we knew exactly what Pirates were gonna do.

“And‚ I thought we had them against the ropes for periods of the game but at the same time you know we made two terrible mistakes in defence and they capilised on them and scored the goals.

“Ja what can you do when you play so hard and give away two goals. I thought the first goal was an error from my team and I take nothing away from them.

"Their third goal was really‚ really a goal that you could not stop in open play. That’s football‚ we wish Pirates all the best in the draw.”

Orlando Pirates through to TKO semis

The crusade to heal the souls of the Orlando Pirates supporters who have suffered a four year trophy drought continued when the Buccaneers surged to ...
Sport
3 years ago

Orlando Pirates coach Milutin Sredojevic has paid tribute to his analytical staff‚ headed by assistant-coach Rulani Mokwena‚ for an apparent ...
Sport
3 years ago

Kaizer Chiefs have been drawn against traditional rivals Orlando Pirates in the semi-final stage of the Telkom Knockout to be played on the weekend ...
Sport
3 years ago
Next Article