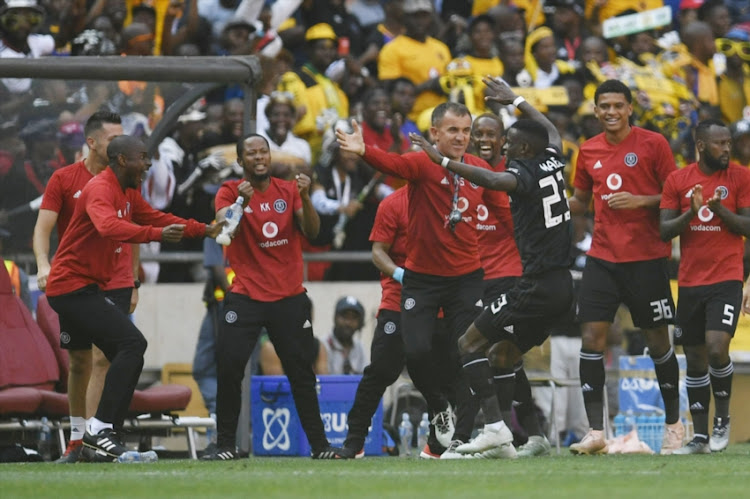 Orlando Pirates coach Milutin Sredojevic has paid tribute to his analytical staff‚ headed by assistant-coach Rulani Mokwena‚ for an apparent improvement in Bucs’ game management in their 2-1 Soweto derby win against Kaizer Chiefs.

It appears to be a style of Sredojevic’s that once his team have even a single-goal lead with pressing football‚ Bucs largely try to consolidate‚ shut up shop‚ and switch to trying to hit on the counterattack.

There have been times – especially as Sredojevic was establishing himself at Pirates last season – that the approach backfired.

Even this season‚ some leads earned by some inspirational attacking in the first half have been blown‚ or almost squandered‚ in more defensive second halves.

This had become known‚ as Bucs entered the first derby of the season in Saturday’s sold-out Absa Premiership match-up at FNB Stadium on Saturday‚ as Pirates’ second-half syndrome.

However‚ as Bucs prepared at Rand Stadium this week for their Telkom Knockout quarterfinal against AmaZulu at Moses Mabhida Stadium on Saturday‚ they would have been heartened at their vastly improved game management displayed against Chiefs last weekend.

Sredojevic had said going into the derby that Pirates had examined every detail of where their consolidation of leads had gone wrong and worked on those in a Fifa international break.

After the derby‚ he paid tribute to Mokwena and the analytical team for appearing to have improved the department in the derby where Bucs‚ having fought back from a goal down to 2-1‚ successfully shut out the second half.

“Regarding our game management‚ it is an every day mission. I need to give credit to our analysts‚ and that department is headed by coach Rulani‚ that they have really gone into the deepest possible details‚” Sredojevic said.

“In that regard that players are getting examples from the biggest clubs in the world that have problems similar to ours – because football problems are the same here‚ or in England‚ or Spain or anywhere.

“All cooked in order to get the performance and get the result. Because we are a big club‚ and as a big club we are obliged‚ as our chairman [Irvin Khoza] says‚ to move the happiness index that last week [after the derby] was on the Pirates side.”

Pirates beat Chippa United 1-0 at Orlando Stadium in the Telkom last-16 to reach the quarterfinals.

Bucs are in second place in the PSL‚ a point adrift of leaders Bidvest Wits.

AmaZulu are in last place on just three points. Usuthu had six points deducted for ignoring a Fifa and Court of Arbitration for Sport ruling over a payment owed to ex-player Phineas Nambandi‚ having been found guilty of unlawfully terminating the Namibian’s contract.