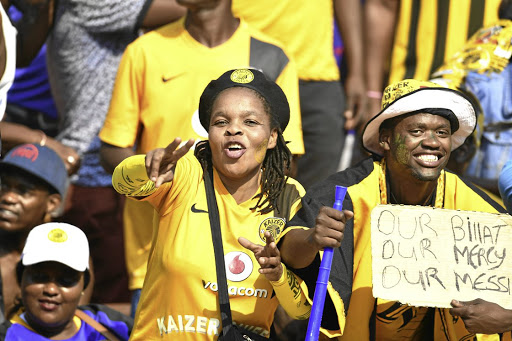 Amakhosi's boisterous fans sometimes turn violent at soccer venues. Their team is currently serving a two-match fan-ban due to their violence and vandalism. Lefty Shivambu/Gallo Images

Kaizer Chiefs will have to make it up to the City of Durban and a legion of their peace-loving fans there after their fan-ban by taking some cup games to the Moses Mabhida Stadium.

Amakhosi have not played in front of their supporters in the city since the infamous incident where fans went on the rampage in April.

Their 1-0 loss to Polokwane City at the Moses Mabhida Stadium last month was the first behind closed doors due the two-match fan-ban they were handed by the PSL's disciplinary committee.

They are set to complete the punishment when they play Chippa United before empty grand stands on November 10.

The municipality pays the club to play some of their home games there and the ban had financial implications.

Kaizer Chiefs have lost an appeal at the SA Football Association (Safa) against their closed-door sentence for the pitch invasion by their fans.
Sport
3 years ago

It was confirmed that Chiefs' Telkom Knockout quarterfinal clash with SuperSport United will be played in front of a crowd at the Moses Mabhida Stadium.

As the club prepares to play again in front of their fans in Durban, Chiefs spokesperson Vina Maphosa says the club was working behind the scenes to prevent violence at stadiums.

"The part of hooliganism is work in progress. Different games, different emotions. We are watching that space all the time and it's continuous activity to educate our fans," said Maphosa.

"We are taking this as a hump that we are going through. We're obviously disappointed but not discouraged. We will continue working hard to ensure that there is peace and love at the stadium."

The club's spin doctor stated that their good relationship with the city was still intact.

"The engagement with the city through the stadium is a professional one and these issues happen as part of the risk of the agreement.

"Although you don't expect things like these to happen in sport, you don't discount them from happening. However, our relationship continues."