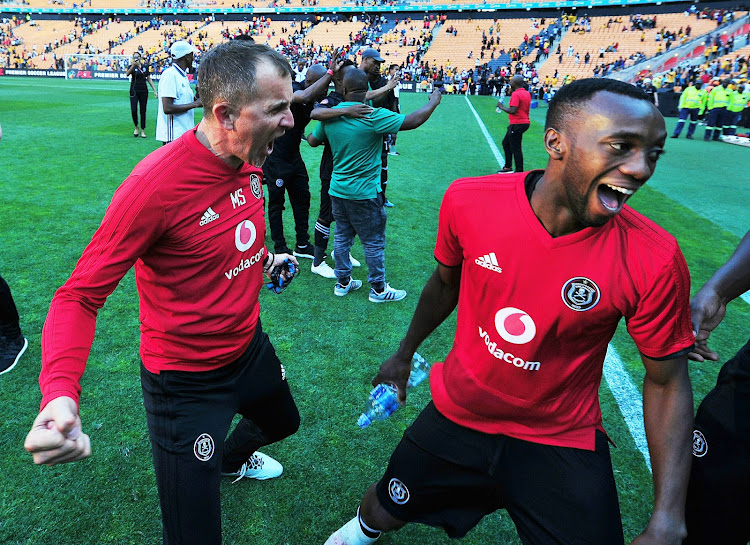 Chiefs‚ as had been expected under the attack-minded Giovanni Solinas‚ threw everything forward for the first 20 minutes of the Absa Premiership matchup at FNB Stadium‚ opening the scoring through Khama Billiat in the 15th.

But Pirates’ response was impressive‚ earning a penalty‚ taken by Justin Shonga and saved by Itumeleng Khune‚ then striking via Innocent Maela (29th) and Vincent Pule (32nd).

After Bucs had largely shut out the second half‚ the post-mortem could be that overall they had the better gameplan and structure‚ and had the answers to almost everything Chiefs tried on the afternoon.

“It’s a match that brings the country to a standstill in a country that has so much pressure‚ tension and stress‚” Sredojevic said.

“A match that can make or break you.

"So having that in mind our job throughout the week was to properly prepare what was needed‚ so that whatever we did in the training sessions was mirrored in the performance in front of that [87‚000] attendance.

“The technical team felt‚ before the match‚ like a group of people who are teachers or lecturers to our players who are the students‚ who have an exam in front of an audience.

“And we were fully aware of what the exam would bring‚ going into the deepest possible details‚ preparing them theoretically to know every detail about what to do in certain situations.

"Trying to make them mentally strong to answer any question that football could pose to us.

“Making them physically fit to last from start to end. Making them technically effective and tactically competitive – the most important.”

Sredojevic said Pirates continuing to attack after Khune’s penalty save showed his players had mental strength.

“This [penalty miss] could have served as an injection of motivation to the opponents‚ and to us‚ we could have cracked then mentally‚” the coach said.

“However‚ showing the mental strength‚ we immediately answered. We did not lose our heads.”

Pirates did seem to get their approach to derby tactically a lot more right than Chiefs did.

It started with Sredojevic picking a full-strength team to beat Chippa United 1-0 in the Telkom Knockout the previous Saturday night.

In contrast‚ Chiefs coach Giovanni Solinas rested at least six frontline players for his team’s TKO win against Black Leopards on Sunday‚ where Amakhosi had to rely on penalties to progress.

Sredojevic’s approach meant he utilised the TKO game for his frontline starting line-up to play together ahead of the derby‚ following the Fifa break.

Solinas’s approach meant he had a fresh combination to take into the derby but one that had not played together for exactly three weeks‚ from Amakhosi’s 1-0 league defeat against Polokwane City on October 6.

In the starting lineups‚ Sredojevic had the edge‚ with Solinas questionably rushing a seemingly not fully fit Leonardo Castro in at striker‚ and playing inexperienced-in-derbies Mario Booysen and Siyabonga Ngezana as a centreback partnership.

The responses within the game from the benches and players on the field also showed Bucs had the edge tactically.