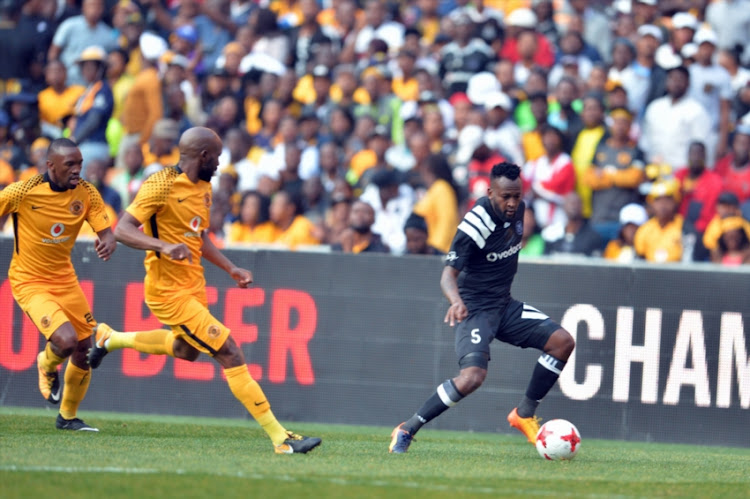 The last 10 official Soweto derbies have produced varying performances‚ with some played at a high-tempo and filled with drama while others producing nothing short of a snore fest.

*7 March 2015‚ Soccer City Kaizer Chiefs 0 Orlando Pirates 0 Chiefs started the game 10 points clear of their nearest challengers in the title race as they headed to second title in three seasons under coach Stuart Baxter who brought Itumeleng Khune back from injury for this game.

This was a decent game despite the lack of goals with Sifiso Myeni of Pirates named man-of-the-match.

*31 October 2015‚ Soccer City Kaizer Chiefs (1) 1 (Mulomowandau Mathoho) Orlando Pirates (1) 3 (Issa Sarr‚ Ayanda Gcaba‚ Thamsanqa Gabuza) This was rude derby introduction for new Chiefs coach Steve Komphela‚ whose side went behind after 26 minutes when Siyabonga Sangweni’s header set up Senegalese import Sarr. Eric Mathoho equalised from a free kick with a header at the back post just a minute before half-time. But‚ Pirates were back in front 10 minutes into the second half as Gcaba scored from a Kermit Erasmus corner. Seven minutes from time‚ Gabuza finished it off to give Eric Tinkler a first derby win and some relief after a poor start to the league season.

*7 November 2015‚ Soccer City (Telkom Knockout semifinal Kaizer Chiefs 0 Orlando Pirates 0 (Chiefs won 6-5 on penalties) Chiefs booked their place in the cup final but needed penalties to do so‚ the fourth time the two clubs had been involved in a post-match shootout with Amakhosi keeping up a 100 percent record. Ugandan import Ivan Bukenya missed an early chance for Chiefs from a corner and so did Lebese as Tshabalala again provided a goal scoring opportunity. For Pirates‚ Ntsikelelo Nyauza had his header saved by Nhlanhla Khuzwayo and Erasmus hit a powerful shot straight at the Chiefs goalkeeper.

*30 January 2016‚ Soccer City Orlando Pirates (0) 1 (Thamsanqa Gabuza) Kaizer Chiefs (1) 1 (Willard Katsande) This draw proved a lot more than other past stalemates with both clubs having a claim to success. Katsande‚ hardly ever on the score sheet‚ claimed a second derby goal to put Chiefs ahead after 28 minutes with Gabuza’s equaliser coming just before the final 20 minutes. Going into the game‚ both sides had been off form with their respective coaches under pressure‚ but Komphela and Tinkler welcomed the point.

*5 March 2016‚ Soccer City (Nedbank Cup first round) Orlando Pirates (0) 2 (Tendai Ndoro 2) Kaizer Chiefs 0 A rare fourth meeting in a single season in a game that had a dramatic finish with Zimbabwean import Ndoro delivering two superb goals to win the game for Pirates and take them further in the Nedbank Cup. It took until 13 minutes from the end to break the deadlock with Ndoro getting his first‚ followed seven minutes later by the second. It might have only been four minutes had Ndoro not been denied by Pieterse when he had any early chance. Chances were few and far between until a dramatic closing phase when Makola played a ball over the top for Ndoro who took a great first touch before hammering the ball home. For his second‚ he smashed a 30-yard strike into the far bottom corner.

*29 October 2016‚ Soccer City Orlando Pirates 0 Kaizer Chiefs 0 This was the 20th goalless draw between the great rivals and not a game that left much in the memory bank. Chiefs saw most of the ball in the opening exchanges‚ as the likes of Pule Ekstein‚ George Lebese and Keagan Buchanan buzzed around the midfield.

*4 March 2017‚ Soccer City Kaizer Chiefs (1) 1 (Joseph Molongoane) Orlando Pirates (1) 1 (Tsepo Masiella own goal) Katsande had his late penalty stopped to deny Chiefs a first derby success under coach Steve Komphela Komphela after Joseph Molongoane had given them a 16th minute lead before Tshepo Masilela deflected Thembinkosi Lorch's attempted shot into his own net in the 33rd minute. Pirates‚ with new coach Kjell Jonevret from Sweden in charge as they attempted to end a run of 10 winless matches in all competitions‚ had Chiefs with back to the wall early on but missed chances.

*21 October 2017‚ Soccer City Kaizer Chiefs 0 Orlando Pirates 0 A third successive draw in the derby albeit that both sides hit the woodwork. Siyabonga Ngezana was terribly unlucky in the 27th minute as he hit the bottom of the upright with a downward header inside the box after beating two markers to connect with a George Maluleka’s freekick. Pirates were also denied by the crossbar as Thabo Qalinge attempted an acrobatic effort as he got goalside of the defence from a freekick but saw his effort bounce away.

*3 March 2018‚ Soccer City Orlando Pirates (1) 3 (Thembinkosi Lorch‚ Luvuyo Memela 2) Kaizer Chiefs (1) 1 (Leonardo Castro) Pirates set a new record for themselves in the derby with a ninth successive unbeaten match against Chiefs‚ whose coach Steve Komphela went through an eighth derby without success‚ not counting a penalty shootout triumph two seasons earlier. Leonardo Castro became the first Latin American to score a derby goal but it was a sideshow to a fine Pirates victory with a fairy tale performance by Luvuyo Memela‚ who came on at half-time and score immediately with his first touch. That made it 2-1 and Memela went on to hammer a nail into Chiefs’ coffin with the third of the game.

Note: Only official competitive matches are included‚ not any friendlies nor meetings in the Charity Spectacular‚ Vodacom Challenge or Carling Black Label Cup.