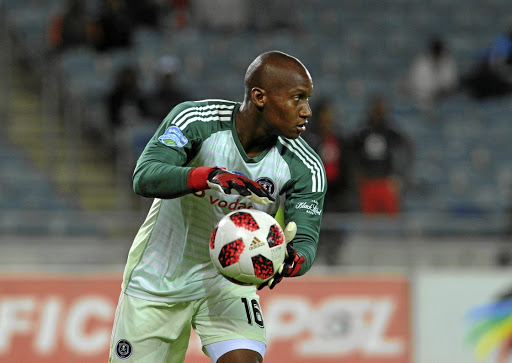 Bucs goalkeeper Jackson Mabokgwane is patiently waiting to get his first run in the Soweto derby. / Sydney Mahlangu/BackpagePix

Jackson Mabokgwane had been Orlando Pirates' first- choice goalkeeper last season leading up to the Soweto derby, but when the big day arrived, it was Siyabonga Mpontshane who got the nod instead.

Prior to his demotion to the bench in the last league match against old foes Kaizer Chiefs last season, Mabokgwane had been a regular.

He started 12 matches in a row and conceded the same number of goals.

But that proved insufficient to convince Pirates' technical team that he deserved a berth in their 3-1 thumping of Amakhosi eight months ago.

They preferred Mpontshane, who had never played any league match before.

Nevertheless, Mabokgwane has not allowed his past snub to demoralise him heading into the first Soweto derby of the season, a sold-out affair at FNB Stadium on Saturday (3.30pm).

The ex-Bidvest Wits shot-stopper has already started both Pirates' last matches.
He has never played in the Soweto derby.

Orlando Pirates could not have asked for a better boost ahead of their last 16 Telkom Knockout tie against Chippa United.
Sport
3 years ago

"It's never about me but about Orlando Pirates as a team. Of course, you must always be ready to step up when your contributions are needed, but as long as the team is doing well I am satisfied,'' said Mabokgwane.

"I am positive that I will play in my first derby on Saturday. But again, the most important thing is the Pirates badge and the team, not who is in the team. I played well in the past two games and I am ready.''

With their January signing Brilliant Khuzwayo having returned from injury, it remains to be seen who Milutin Sredojevic goes with in goal on Saturday. Khuzwayo spent six years at Chiefs and would surely be eager to prove his worth to his former employers.

In explaining his decision to trust Mpontshane ahead of Mabokgwane in the last derby, Bucs mentor Sredojevic said: "A match of the magnitude such as the Soweto derby sometimes demands a gamble.''