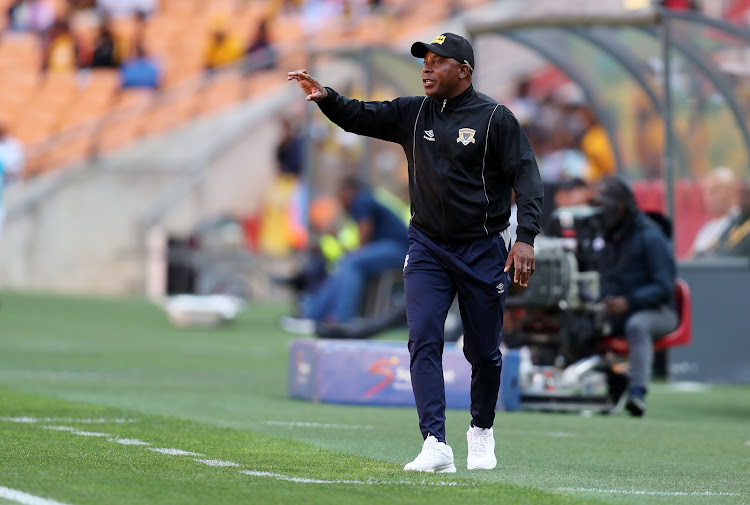 Black Leopards coach Joel Masutha believes his club can compete for a “comfortable position” this season after five years out of the top-flight and produced evidence of that on Sunday in a narrow defeat to Kaizer Chiefs.

Leopards held Chiefs to a 1-1 draw after extra time but then went down on post-match penalties in the first round of the Telkom Knockout at FNB Stadium in Soweto.

Rookie coach Masutha will take positives out of the game to the club’s league campaign‚ especially for a return to Johannesburg to meet Chiefs again on Wednesday‚ November 7.

Masutha is setting his sights higher than just avoiding relegation this season.

“If I talk with my players about relegation‚ it will be like I don’t trust them.

"We don’t talk about that at all.

"We are not playing to avoid relegation.

"We have come here (to the Absa Premiership) to compete and I believe we can still finish in a comfortable position‚” he said.

“I think it was a very good game of football between two teams who wanted to play‚" he said.

"I believe both our sets of supporters are happy with what we displayed but‚ at the same time‚ I feel we had three or four chances to win the game.

"That was our undoing‚” said the Leopards boss.

“Credit must go to Chiefs‚ they came back in the second half and imposed their game and put us under pressure.

"We managed to handle that which is not easy at FNB Stadium especially for a team coming from the National First Division.

“The occasion on its own was kind of intimidating but I’m not disappointed at all.

"The boys did what we asked them to do‚ they showed what they are capable of.

"It was the first time for them to go to extra time‚ or be involved in a penalty shootout.

"We were playing a big team who have won many cups through penalty shootouts so obviously the nerves got the better of them‚” Masutha added.

Amakhosi to play another game in empty stadium.
Sport
3 years ago

Kaizer Chiefs’ needed a penalty shootout to beat Black Leopards to advance in the Telkom Knockout and keep up their hopes of ending their long ...
Sport
3 years ago
Next Article