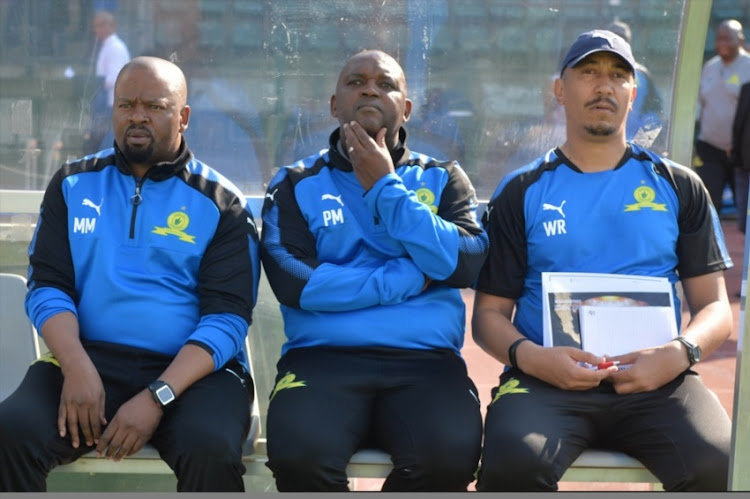 Mamelodi Sundowns coach Pitso Mosimane has credited the Pretoria side's hard-fought Telkom Knockout win over tricky Bloemfontein Celtic at the weekend to the members of his technical team.

Mosimane only returned to SA a day before Saturday's encounter after spending the week in Morocco attending a Confederation of African Football (Caf) Pro Licence course.

Assistant coaches Manqoba Mngqithi and Wendell Robinson prepared the team in the head mentor's absence and he generously showered his colleagues with praise.

“I need to give credit to my technical team‚ to be honest they won this game for us‚” Mosimane said.

The Sundowns coach went as far as describing Mngqithi and Robinson as the best technical team on the continent after the masterminded the 1-0 win over Celtic.

“They are the ones who prepared the team‚" he said.

"They did very well with the match analysis and it is good to be surrounded by quality.

"I always boast that they are the best technical team in Africa and I believe they are.

"Anyone can make an argument against it but I can take you on that argument.

"Local is lekker‚ they are boys from the township and they represent the demographics of the country.”

Reflecting on the match that was won by a lone Gaston Sirino effort in the second half‚ Mosimane admitted that they dominated the first half while Celtic recovered after the break even though the visitors failed to score.

“It was a very entertaining game‚" he said.

"In the first half we were good but in the second we must give it to them.

"I am thrilled to see Steve Komphela play good football like this‚ but we have to wait and see if they will play like this from now on.

“This was a high level game‚ not too many teams can pin us in our own half like Celtic did.

"They overloaded the midfield‚ they bypassed our pressing game because normally we press from the top.

"I just think the quality of local coaches keeps on coming up and I hope football will respect the local coaches because this was a high level match like the Champions League.

“We threw everything at them but they did not crack under pressure.

"The only way I could play was to get behind their defence with high balls and it worked out with the goal by Gaston Sirino.

"He looked off-side and I would not have been surprised had the linesman called it off-side because I thought it was off-side to be honest.

"If it was not off-side‚ then it was marginal but both linesmen were quality and they come after Sakhele Siwela.”

Mamelodi Sundowns’ performance often lacked conviction but the verdict from their singing supporters was unequivocal.
Sport
3 years ago

The continuing uncertainty over the sale of Bloemfontein Celtic has been disruptive and frustrating to the financially distressed side but coach ...
Sport
3 years ago
Next Article