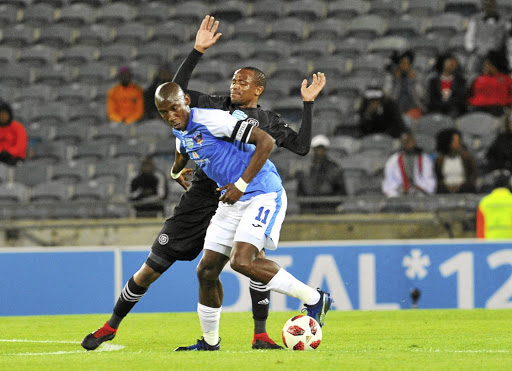 Chippa United coach Eric Tinkler would only say he "did what I felt was necessary", explaining his first half substitution of captain Mark Mayambela in Saturday night's 1-0 Telkom Knockout loss against Orlando Pirates.

Tinkler said the reason for Mayambela's substitution, being replaced by Daine Klate in the 42nd minute, should have been obvious to anyone watching the game.

The former Pirates forward was taken off after the player angrily responded with a gesture towards his coach.

This came after Tinkler gave the left wing player a mouthful for being caught out of position on a Buccaneers attack.

"You didn't see why? Surely it's obvious," the coach responded when questioned on why he took Mayambela off.

"But it's an internal matter. And that will be dealt with internally.

"But it was more than obvious. This is the biggest game on TV this weekend. Everybody across the country is watching Pirates. And you can't behave that way."

Eric Tinkler is looking forward to a return to his old stomping ground with Orlando Pirates and says her will take a much improved Chippa United with ...
Sport
3 years ago

Mayambela later took to Twitter to apologise for gesturing at his coach.

Mayambela's substitution came in a first half where Tinkler was not happy with his team's performance overall.

"We had planned to press Pirates," Chippa's coach said.

"But we have played against other teams who have played in a 4-3-3. So the plan was to look to press them and we didn't do that in the first half."

Pirates took the lead in a period where the teams were matching each other chance for chance after Xola Mlambo was fed into space on the right and cut back for substitute Vincent Pule to finish at the near post.