Lebo Mothiba created a piece of Bafana Bafana history for himself 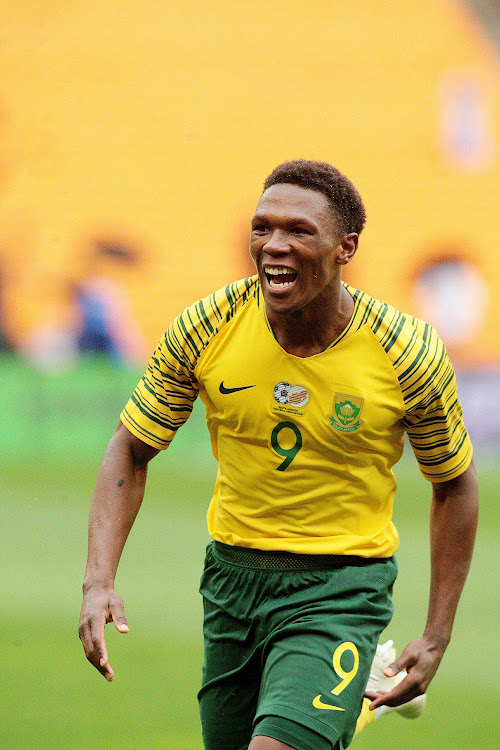 Lebo Mothiba of Bafana Bafana celebrates scoring a goal during during the 2019 Africa Cup of Nations qualification match between Bafana Bafana and Seychelles at FNB Stadiumon.
Image: Veli Nhlapo/Sowetan

Exciting young striker Lebo Mothiba created a piece of Bafana Bafana history for himself at the weekend when he became the first player to score in his first three games for the national team.

Mothiba has been in excellent form for his French Ligue 1 side Strasbourg in the early part of this season‚ and converted that into a strong performance for the national team in their 6-0 hammering of Seychelles at the FNB Stadium on Saturday.

The 22-year-old scored arguably the pick of the goals with an excellent finish into the top-corner‚ and then provided an exquisite touch for Percy Tau to add the fourth later on.

It follows a goal on debut against Angola in the Four Nations competition in Ndola in March‚ after which he came off the bench three days later to net against Zambia as Bafana lifted the trophy.

No other player has scored in his first three caps for the national side‚ and should he make it four against Seychelles on Tuesday‚ he would join Phil Masinga as the only Bafana player to ever net in four consecutive games in their career.

Partnership with Tau fruitful for Bafana
Sport
3 years ago

Katlego Mphela‚ who has drawn some comparisons with Mothiba‚ for both their style of play and that both have now played for Strasbourg‚ netted a brace on debut against Seychelles in the 2005 COSAFA Cup and followed that up with a winner against Mauritius in his second cap.

“Lebo ... there has been a lot of talk about his movement‚ but he is the one that is least ‘South African’ [of the strikers]‚ and I say that with all due respect.

"In England we say that Alan Shearer used to ’lead the line’‚ to be that type of striker‚” Baxter told reporters.

“Lebo led the line‚ he was bullying their centre-backs‚ he was making nice little runs behind and they didn’t have a moment of peace. Off that‚ it worked quite well with Percy a little bit deeper‚ where he was more difficult to pick up.”

Mothiba himself spoke before the weekend clash of how he wanted to take his national team chance.

“Sometimes there are games where you do well‚ score goals and everyone says you are the right one for thenational team‚” Mothiba told TimesLIVE in Strasbourg.

“But then sometimes you can go five or six games without scoring a goal and the fans start saying‚ ‘this one is not a good striker’.

"I can just do my best and if I get the opportunity to score goals‚ that is what I will try to do.

“I won’t say that I am the answer to the scoring problems of South Africa.

"The PSL do have a lot of good strikers‚ there are good players in the country. I want to help the national side win games‚ to show people what I have learnt all these years in France.”