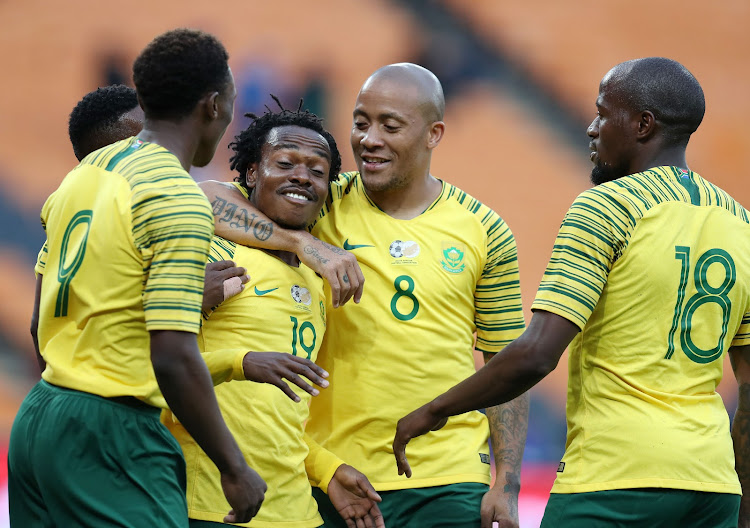 Bafana Bafana coach Stuart Baxter has defended Percy Tau after the Belgium-based striker was heckled by supporters at FNB Stadium on Saturday.

Baxter's charges romped to a comprehensive 6-0 win against hapless Seychelles in a one-sided 2019 Africa Cup of Nations (Afcon) qualifier and even though Tau managed to get his name on the score sheet‚ the former Mamelodi Sundowns' star was targeted by fans who thought that he should have scored more goals.

The Briton said Tau's commitment to the cause can never be questioned.

“I think he was disappointed with himself on the chances that he missed.

"I thought he was bullying their centrebacks and making nice runs behind them‚ they never had a moment of peace.

“I thought Lebo worked well with Percy. He was a little bit deep and more difficult to pick up.

Bafana took their tally to eight goals in three qualifiers (the others were against Nigeria in a 2-0 away win for Bafana and a goalless draw at home to Libya) with Tau scoring the fourth on Saturday after receiving a brilliant pass from his strike partner Lebo Mothiba‚ who also scored his third goal in three matches in a national team shirt.

Even though the litany of missed opportunities sparked criticism‚ Baxter refused to concentrate on the negatives and preferred to adopt a positive outlook ahead of Bafana's return game against Seychelles at Stade Linite in Victoria on Tuesday.

“I won’t see any mistake that was made because the player’s overall performance was good‚” said the 65-year-old Briton.

But Baxter cautioned against allowing the comprehensive final score to lull his charges into a false sense of security after playing against a team that was also beaten 5-1 by Libya and 3-0 by Nigeria‚ who are one point behind Bafana after trashing Libya 4-0 in Uyo on Saturday.

“Yeah‚ it’s a very good win‚ but I think that we would be taking a lot away from the performance of the players because to start with‚ you are coming against the underestimation factor which has not been our strong suit‚" he said.

“We scored three goals in the first half and played some very good football.

“I think the way the players played should be congratulated‚ maybe more than the fact that we scored six goals.”

Bafana flew to the Indian Ocean island late on Sunday and will likely have done enough to qualify if they get another three points in the artificial pitch of Victoria on Tuesday.

A win would take Bafana’s point tally to ten ahead of the penultimate fixture against Nigeria in Johannesburg on November 16.

Bafana will finish their qualifiers with an away trip to Libya in March next year.

Lebogang Mothiba says he is back in South Africa to score goals for Bafana Bafana in their 2019 Africa Cup of Nations qualifier against Seychelles at ...
Sport
3 years ago