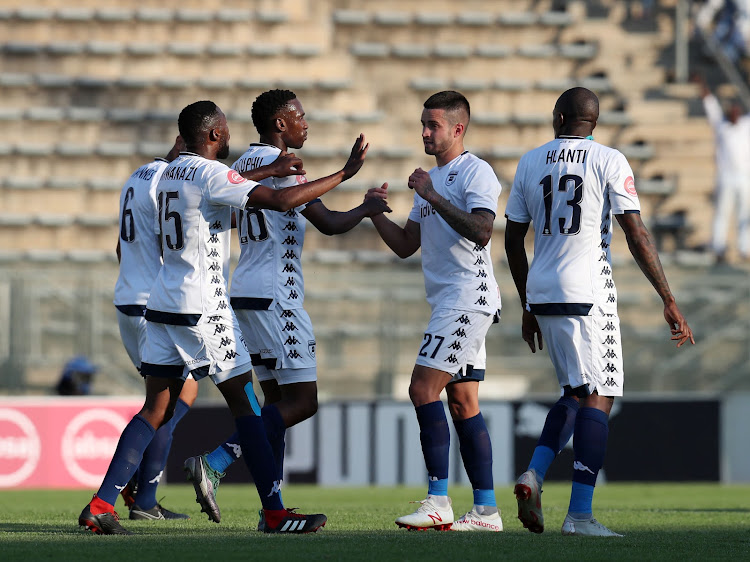 Bidvest Wits midfielder Keegan Ritchie celebrates with teammates after scoring the equaliser during the 1-1 Absa Premiership draw away at champions Mamelodi Sundowns at the Lucas Moripe Stadium in Atteridgeville, west of Pretoria, on October 7 2018.
Image: Muzi Ntombela/BackpagePix

A superb setpiece from Keegan Ritchie ensured a share of the spoils for Bidvest Wits as they held champions Mamelodi Sundowns 1-1 away in Atteridgeville and took a one point lead on the Absa Premiership standings.

The left footed free-kick dipped into the net from outside the area to equalise after Sundowns had gone ahead 12 minutes earlier through evergreen captain Hlompho Kekana.

It was a result that fairly reflected an absorbing encounter as Sundowns were held to a fifth draw in seven matches this season, although they are still unbeaten.

There was drama even before the start of play when Thapelo Morena had to pull out of the starting line-up after sustaining a thigh injury in the warm-up and then with 90 seconds gone, Terrence Dzvukamanja headed Ritchie’s in-swinging left-footed free-kick against the Sundowns upright.

Wits pressed the champions and did not let them play at all in the opening 20 minutes.

New Zimbabwean signing Dzvukamanja had another chance from Richie’s corner in the 16th minute but in trying to turn to get his shot on target his effort went wide.

Another set piece just before the half hour mark saw Wits captain Thulani Hlatshwayo flick on the corner and Scottish striker Simon Murray come in unmarked at the back post, heading forcefully at goal only for Sundowns goalkeeper Denis Onyango to make a strong save.

Onyango also did well to stop a driving shot from Ritchie.

But Wits could not keep up the pressure as the heat began to take its toll and Sundowns were able to get in two first half chances.

First Toni Silva cut inside and shot at target only to hit his own man Gaston Sirino, who inadvertently got in the way.

Then, some four minutes to half-time, Silva slipped the offside trap and was one-on-one with Wits' keeper Darren Keet who stuck out a leg to deflect the ball in a fine stop and deny Sundowns the lead.

The missed opportunities were enough for Sundowns' coach Pitso Mosimane to jerk Silva off at half-time and bring on Phakamani Mahlambi, which injected much-needed energy into their performance.

But not before another good chance for the visitors as Wayne Arendse, who had a late call-up to the team with Morena’s injury, made a shallow pass that Murray intercepted but Onyango again saved well.

At the other end, Lebogang Maboe had a chance after a one-two with Tebogo Langerman but his 51st minute shot was poor.

But it was notice that Sundowns were getting back into the game and their goal arrived five minutes later as Sirino got goal side of Buhle Mkhwanazi and as he was tackled the ball fell for Kekana to tuck it away.

They looked to then finally get on top of Wits until giving away a free-kick in the 67th minute which produced a classy finish.

Keet looked to handle the ball outside the edge of the area right in stoppage time at the end of the game in a controversial finish but the match officials did not give Sundowns a free-kick and Keet a red, rather letting the incident go.

Kaizer Chiefs rattled around an empty Moses Mabhida Stadium on Saturday, condemned to playing behind closed doors, and then further punished as ...
Sport
3 years ago

Kaizer Chiefs’ slogan‚ dating back to their hippy origins in the 1970s‚ is “Love and Peace”‚ and there is a lot of love going around at Naturena at ...
Sport
3 years ago
Next Article