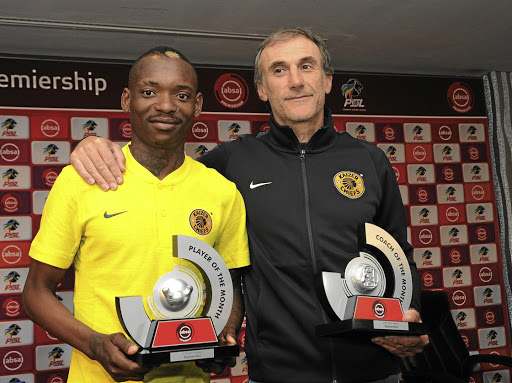 Having watched his former teammates including Bongani Zungu, Keagan Dolly and most recently Siphiwe Tshabalala secure moves to Europe, Kaizer Chiefs star Khama Billiat insists he has not lost hope of fulfilling his dream.

Billiat, 28, has had a spectacular start to his Chiefs career with brilliant performances that won him the Absa Premiership Player of the Month for September. His trainer, Giovanni Solinas, scooped the Coach of the Month honours.

Solinas last month showered praise on the Zimbabwean, saying he is too good to be playing in SA league.

Billiat said yesterday: "Every player wants to play in Europe and it can only happen when you deserve it. I don't think I have done enough.

"I always want to be better and improve. God's time is the time, so if I haven't been there it means it wasn't the right time. The time will come."

Amakhosi fans will be pleased to know there is a lot of love in the air at Naturena, with Billiat saying: "I am very fortunate to have a coach like him but it's about the team. I don't see it as something special [in coach praising him], he is always like that.

"I am grateful for the love he has for me. I love him too. I love the relationship we have."

The Glamour Boys will take on Polokwane City in a league encounter that will be played behind closed doors at the Moses Mabhida Stadium tomorrow (6pm).

Chiefs were penalised by the PSL for destruction that ensued earlier in the year at the Durban stadium after their 2-0 loss to Free State Stars in the Nedbank Cup semifinals.

Club owner Kaizer Motaung instructed the fans to stay away from Moses Mabhida.