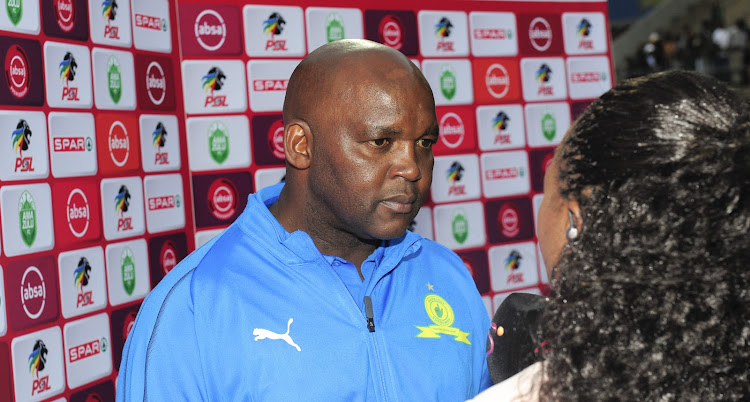 “We won the game‚” said Pitso Mosimane after his Mamelodi Sundowns had a late goal controversially disallowed being held to a 0-0 Absa Premiership draw by Bloemfontein Celtic at Dr Molemela Stadium on Wednesday night.

Mosimane was adamant that assistant-referee Zandile Madidilane got his call wrong overruling the goal when Lebohang Maboe had Jose Ali Meza’s cross in the net in the 83rd minute.

Downs teammate Themba Zwane was in an offside position‚ but arguably not interfering in play.

Sundowns striker Toni Silva also headed onto the crossbar in the 10th minute‚ though Celtic also spurned a few chances catching the Brazilians on the counterattack.

“A good game of football. But possession and dominance doesn’t win you the game – you must put the ball in the net‚” Mosimane said afterwards.

“I think Lebo Maboe could have had his third goal. Because Lebo came from behind to score.

“It’s a little bit – what can you say; it’s an unfortunate situation with decisions.

“I saw yesterday [on Tuesday] that a penalty was given when nobody was touched in Cape Town‚ against Cape Town City [scored by Simon Murray in a 2-0 win to Bidvest Wits].

"I think Benni [McCarthy‚ City’s coach] should have been upset about that.

“But also‚ I was upset when they won against us in the MTN8 semifinal [first leg‚ in Cape Town‚ 1-0] – they scored an offside goal and he [McCarthy] went and raised the trophy.

"You know – who cares at this point in time [about how he won it]?

“And I think Anthony Laffor’s goal was onside too. But even if it was offside it was very marginal. And then we won 1-0 in Pretoria.

“But that’s the way it is. You have to accept‚ you have to move on. Probably I will also benefit with a penalty or an offside decision.

“Even the assistant-referee on the far side [against Celtic] left a player who was two to three meters offside.

“Ja‚ it’s part of the game‚ we must also understand‚ because maybe sometimes you benefit. But at this point in time I’m not benefitting. I’m having the short end of the stick.

“And I think that goal puts you into a position to contend for the title. And I don’t have that at the moment.

“That’s football. We’ve got to accept and move on.”

The result left Sundowns in seventh place from two wins and four draws out of six games‚ though they do have some games in hand on the front-runners.

Celtic followed up a 1-0 home loss against Maritzburg United with a draw that sees them in fourth place after seven matches from four wins‚ two draws and a defeat.