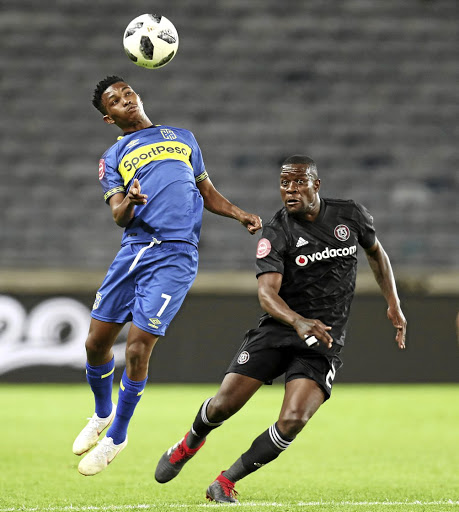 Cape Town City's little dynamite Gift Links is ready to explode against SuperSport United in the MTN8 final at the Moses Mabhida Stadium on Saturday (7pm).

Links, 19, reckons the defenders believe they can have it easy coming up against him because of his tiny frame, warning the Matsatsantsa a Pitori rearguard he's ready to take them on in Durban.

"Anyone who will be playing on my side, I think I will give him a tough time. It's going to be one of his toughest challenges because I know what I can do," said Links this week from the Citizens' training base at Hartleyvale Stadium, Cape Town.

"I don't know what the one who's going to play on my side can do, but most of the defenders, because my body is so small, think it's going to be easy. It's going to be a challenge that side."

He could come up against Grant Kekana, who has been SuperSport United's regular right-back this season.

But whoever is standing in his way, Links plans to have a memorable final. City said they spent a "club record fee" to sign him from Egyptian side Pyramids FC two months ago.

Links, who previously also starred for Platinum Stars, will be playing his first final.

"It's my first final. Unfortunately, three months back we lost in the semifinal [with] my previous team [Pyramids], so I'm looking forward to it," he continued.

"I'm sure the players won't let SuperSport beat us twice. We have to return home with this one. Yeah, that's all we want. We have to put in 150%."

Links has mainly been introduced from the bench, but got the nod for the starting berth in their last match against Orlando Pirates, which ended 2-2.

"Every time I come on as a substitute, the coach [Benni McCarthy] tells me, 'Boy, don't be scared, just play your own game'. He told me he would introduce me little by little, so now I'm looking forward to starting more games.

"If I get that chance, I will make sure that I cement my place in the team," Links added.