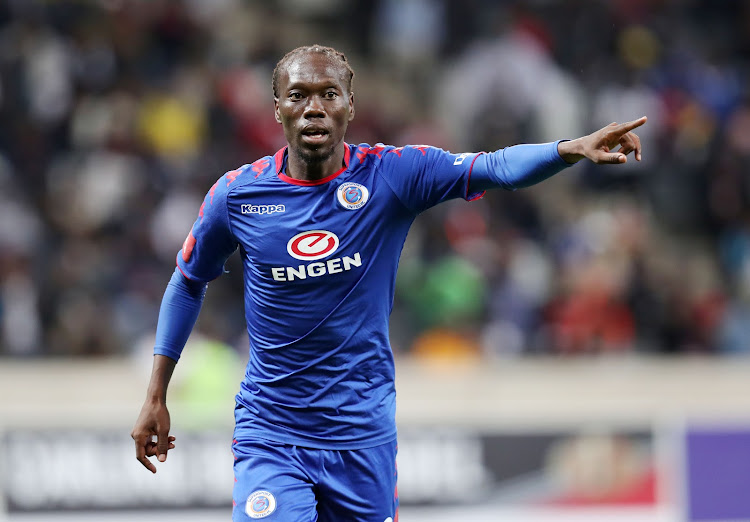 The SuperSport coach is happy to have attackers Bradley Grobler‚ James Keene and Evans Rusike scoring goals freely going into the cup final.

Grobler also has a brace this season‚ in a 2-2 home leg draw of the MTN8 semifinals against Kaizer Chiefs last month‚ and three goals in total.

Rusike has five goals in total‚ and is the league's top scorer with four‚ and is SuperSport’s most dangerous all-round forward going into the final.

Tembo’s headache is that he cannot fit Keene and Grobler‚ both centre-forwards‚ and neither quick enough to play on the right‚ where Thuso Phala and Fagrie Lakay have alternated‚ in a front three.

Grobler seems set to start and Keene to come o0ff the bench.

“It’s always good when you have your attackers scoring goals.

"That’s what you need‚ because football is all about scoring goals‚” Tembo said on Wednesday.

“I’m very happy for Bradley‚ Evans and James for getting the goals. That’s why they are here. We want them to score.

“They’ve responded very well‚ and we just hope that they continue.”

Tembo has continued the preferred system of one of the many SuperSport coaches he had been assistant to‚ predecessor Eric Tinkler‚ of a front three ahead of a highly effective midfield three – usually Dean Furman‚ Reneilwe Letsholonyane and Teboho Mokoena.

The coach pointed out that it is not always the same three in the middle.

“We try and rotate our players and ‘Tebza’ is a young player. He’s just learning as well from Dean‚” Tembo said.

“Yeye [Letsholonyane] is hard working. He still has the desire and hunger to achieve.

“That’s very key. You want that irrespective of his age. I don’t even look at his age.

“But we still have Aubrey [Modiba] who plays in midfield. Last week Yeye was on the bench and had to come in.

“We have a structure where whoever plays just fits in because they understand the structure and the principles that we use within that structure. That’s very key for us.”

SuperSport and City are meeting in their third cup final in three seasons.