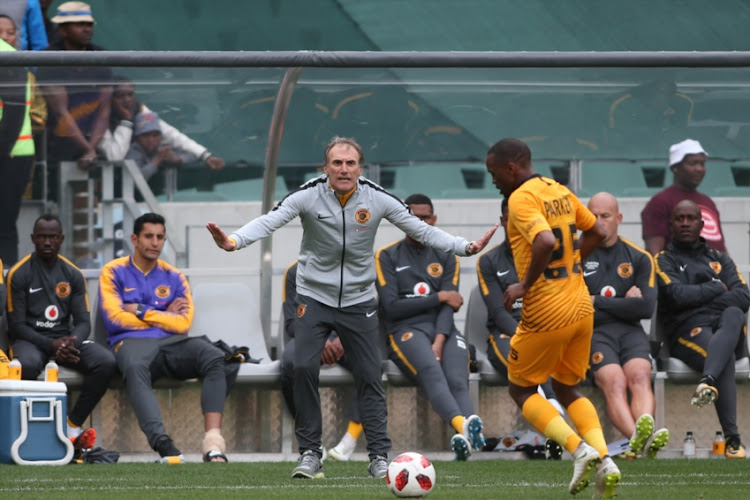 A crisis can bring out the best in a coach‚ Kaizer Chiefs boss Giovanni Solinas has said‚ summing up his nervy start at Amakhosi and the response of a past week that saw three convincing wins in a row.

In truth‚ Solinas still appears a little overawed by his surroundings at one of Africa's biggest-supported football clubs‚ even after going to his third win in eight days with Saturday's 2-0 Absa Premiership victory against AmaZulu.

A 4-1 thrashing of Cape Town City away last Saturday‚ 2-0 win with a virtual B team against Free State Stars away on Tuesday‚ then a convincing win against Cavin Johnson's tough AmaZulu have transformed Solinas's outlook at Amakhosi.

After just three weeks of preseason and having to backpedal through August without a win‚ where the matches came thick and fast and there was little time for Solinas to train with his new team‚ the coach said he used the Fifa international break to begin to convey his identity on his squad.

Having first established that he will play exciting‚ attacking football at Chiefs‚ but been let down by poor defending in the last three games the goals have kept coming‚ and Amakhosi have conceded just once.

"When you are in a difficult moment‚ this is the moment where you have to come up with the good ideas‚" Solinas said.

"Because victories can make the coach lazy.

"But a crisis motivates you to make good decisions in your analysis.

"I am not happy with the start Chiefs had this season. It's not the level for Chiefs.

"But we have worked hard in this Fifa break. We analysed not just this season but also the last three seasons.

"From this moment [the Fifa break] we started our jobs. Our job started from the fundamentals‚ the basics.

"I am happy because the cooperation from the players has been unbelievable. They want to learn‚ they want to improve.

"Our defensive structure is much better now because we defend as a team."

Solinas has arrived and‚ given Chiefs' past three trophyless seasons‚ barely been given breathing space to find his feet as expectant Amakhosi's supporters have almost demanded football that might yield trophies almost immediately.

"I repeat - in football you need time for improvement‚" the Italian said.

"We started with a handicap because there was no preseason. We had a lot of games in a short time‚ and no time for training.

"But I'm very happy. I always believed in these guys because I saw their effort and their concentration they put into the training sessions.

"When a team prepares for games in the manner in which these boys have‚ where every player is unbelievable‚ this makes me optimistic.

"We [the technical team] also need time to understand the characteristics of every player.

"But now we also need to continue to improve. Because three wins is nothing for Kaizer Chiefs. This is normal for Chiefs."

Solinas has more time to work with his team as they now have nine days before meeting Highlands Park at Makhulong Stadium on next week Tuesday (October 2).