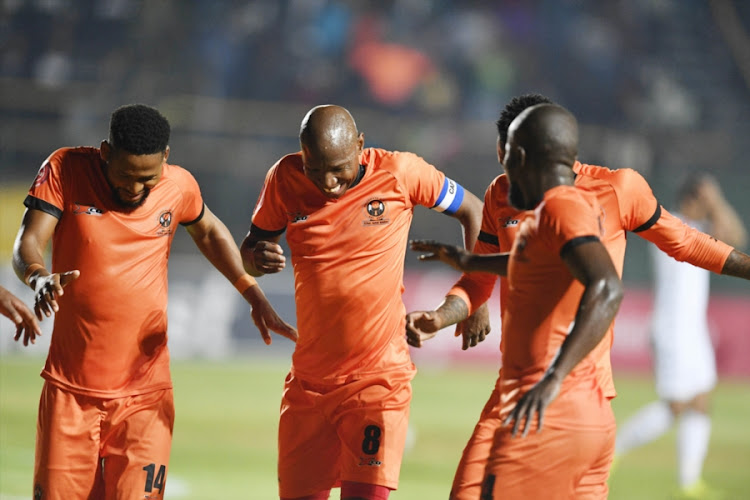 Polokwane City midfielder and captain Jabu Maluleke celebrates with teammates after scoring a stunning free kick during the 1-0 away win over Bidvest Wits at Bidvest Stadium in Johannesburg on Friday September 21, 2018.
Image: Lefty Shivambu/Gallo Images

A stunning freekick from Jabulani Maluleke was worthy of winning any game but what was more outstanding was that City had to play with a one-man disadvantage for most of the match after Salulani Phiri was sent off.

The victory was a second in a row for City, whose defenders kept a clean sheet again and are now up to 10 points.

“We showed character and discipline and we deserved this win,” said their coach Jozef Vukusic.

It was a huge chance for Wits to open up a decent lead at the top of the table but they fluffed their lines.

“The final ball around the edge of the box left a lot to be desired. We had a great opportunity in our last two games to jump into the lead but maybe now its time to make a few changes,” said a disappointed Gavin Hunt.

“A lot of our big players didn’t turn up.”

The sending off of Phiri came after just 21 minutes as his tackle on Thabang Monare, which could well have seen the Wits midfielder suffered a twisted knee.

Luckily Monare escaped unscathed but there was little doubt in the mind of the 26-year-old referee Abongile Tom that the Zambian deserved an automatic red.

Wits had already looked the strongest of the sides before the dismissal but then had the run of the game after as they besieged their guests.

Their build-ups were quick but with too many loose balls and errors. It took until the 41st minute before Wits’ first real chance after Gift Motupa’s flick on set Mxolisi Machupu in the clear but his shot was saved by George Chigova, whose outstretch foot deflected it wide of goal.

Straight after that Monare fired in a long range shoe that the big goalkeeper did well to stop and right on the half-time whistle Motupa missed a free header as Deon Hotto delivered a crisp cross.

Wits saw centre back Buhle Mkhwanazi go off at half-time with a sore back, which saw Vuyo Mere come on and skipper Thulani Hlatshwayo switch across from right back to the centre of defence.

But they failed to get any clear cut chances in the second half and with two more substitutes still made no impact.

Instead Maluleke found the net with a brilliant free kick after 75 minutes to grab the victory.

In the end it was the gutsy defending from a committed Polokwane that saw them go home with an unlikely three points.

Kurt Abrahams’s coach at Belgian second-tier side Westerlo has been raving about the young forward‚ suggesting he “can do things that many other ...
Sport
3 years ago

Pitso Mosimane says teething problems will be worth it in the end if they win the 'grand slam' later this season..
Sport
3 years ago
Next Article