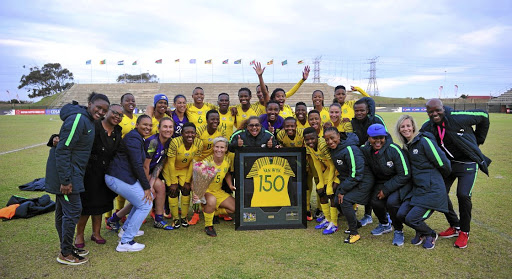 Van Wyk, 31, is now sitting on 150 caps for Banyana after her appearance in the 6-0 demolition of Malawi in the ongoing Cosafa Women's Championship in Port Elizabeth this week.

Van Wyk has come a long way since making her international debut in 2005 against Nigeria in the African Women's Championship (AWC).

"It's been an absolute honour to have represented my country 150 times. I honestly never thought I'd make it this far and I feel really blessed that I have," said Van Wyk, who's been playing for US side Houston Dash for almost two years.

"I've gone through many challenges, the setbacks and failures throughout my journey with the national team, but it has prepared me to work harder - to push harder to reach this stage of my career," she told Sowetan.

Van Wyk's ultimate goal is to help Banyana qualify for the World Cup for the first time. The next tournament will be hosted by France next year.

To qualify, Banyana must finish in the top three at the 2018 CAF Women's Championship to be hosted by Ghana from November 17 - December 1.

"I think the team is experienced enough and we've been together for quite some time. Some of us have gone through that failure of not being able to qualify for the World Cup and we are hungry to be in France. Hopefully, [winning] the Cosafa Cup will give us that confidence booster going into the AWC," she added.

Banyana players with over 100 caps