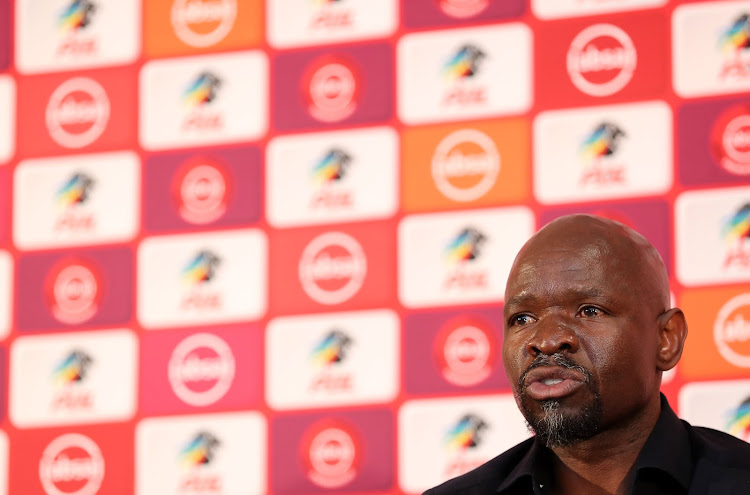 Bloemfontein Celtic coach Steve Komphela speaks to the media at the PSL Offices in Parktown, Johannesburg on September 17 2018 after collecting the coach of the month award for the month of August for guiding his team to an impressive start with four wins and a draw in the Absa Premiership.
Image: Muzi Ntombela/BackpagePix

Bloemfontein Celtic coach Steve Komphela has decried what he believes to be a culture of negativity surrounding South African football‚ which he says has an adverse affect on the product.

There seemed no small degree of personal experience Komphela was mixing into his message as he laid into the critics.

He experienced a torrid just-short of three seasons trophyless at Kaizer Chiefs where he was hounded by his own disgruntled supporters in the stands‚ and received a fair share of criticism in the media.

The coach compared that situation to what he has been experiencing with a flying start of four wins and a draw at Celtic‚ despite arriving to player strikes and the possibility of the club being sold.

“There is a difference between a fan and a supporter.

"Celtic supporters‚ those guys‚ they support their team. Those are the people who go there and they sing their lungs out‚” Komphela said.

“In Thohoyandou we also saw something – it was unbelievable [as Celtic beat Black Leopards 1-0 in front of a packed Thohoyandou Stadium on Sunday].

“Now when you start highlighting that‚ speaking well about that‚ and not diluting it‚ it reinforces. And it is an indirect invite to any other potential supporter‚ or to any other fan who thinks they are a supporter.

"Then they will start to support and learn what it means.

“… But what is the culture of‚ and the identity of a proud South African? Has it been diluted?

“Have we passed on too many conflicting messages to South Africans‚ so that they don’t know what is it to support their nation? It’s sad.

“One thing we fail to do is to build our people; to give guidance and direction‚ and allow that if we manage to get six‚ we need to get 10 of these people [potential supporters].

“You pass on a positive message. You give positive teachings. So that it is a reflection of a good product.

“We condemn everything that moves‚ and immediately the next day we ask‚ ‘But where are these supporters?’

“My man‚ you rubbished the product and they moved away from it‚ and you’re asking‚ ‘where are they?’

“Invite them by reflecting the positives. Show all the good things that happened in the product. You will add one‚ or two‚ or three [supporters].

“But the way we do it is so wrong. Sometimes we think like everybody else. And when we need everybody else to need a different way of seeing things‚ acting on things and behaving accordingly with regards to things‚ we don’t.”

Second-placed Celtic’s next Absa Premiership assignment is against Maritzburg United at Dr Molemela Stadium on Sunday.