Dean Furman desperate for SuperSport to move past defeat to Pirates 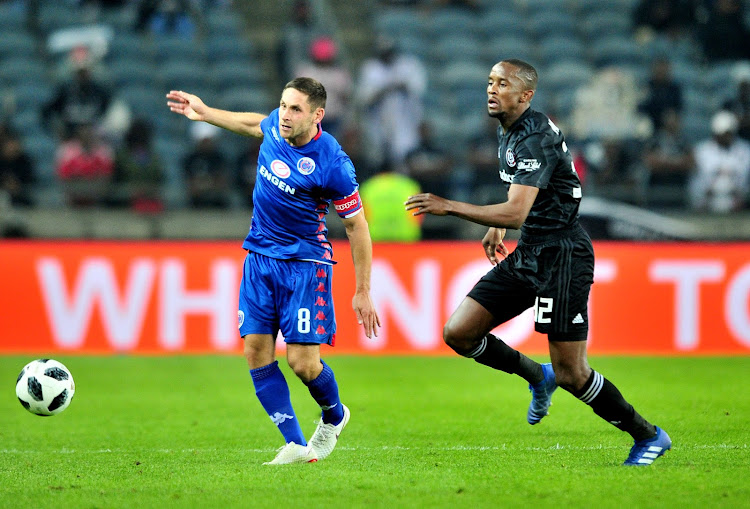 SuperSport United captain and midfielder Dean Furman vies for the ball under the watch of Linda Mntambo of Orlando Pirates during the Absa Premiership match at Orlando Stadium in Soweto, south of Johannesburg, on September 15 2018.
Image: Samuel Shivambu/BackpagePix

SuperSport United captain Dean Furman has asked his teammates to forget about their 3-1 league defeat to Orlando Pirates a few days ago and bounce straight back to winning ways against Black Leopards at the Lucas Moripe Stadium on Sunday.

While Furman lamented the end of their 10-match unbeaten run against Pirates‚ stretching back to April 2014‚ he also preferred to focus on United's immediate challenges - against Leopards on Sunday and the MTN8 final against Cape Town City in Durban on September 29.

“We’ve enjoyed our run against Pirates‚ that’s for sure‚” said Furman.

“But Pirates are a good team and you can’t beat them every time.

"But like the coach (Kaitano Tembo) said‚ we didn’t start well to stretch our run against Pirates.”

The Bafana Bafana midfielder hopes the defeat to Pirates is not going to affect the team’s ambition to fight for the league title this season.

“Does it dent our confidence? Not really‚” he said.

“We’ve done well since the season started and we’re in the cup final. We’ve got an important home game against Black Leopards before the final against City.

“We can’t start thinking about the cup final now.

"I think that’s going to be really important for us going into this week because we’ve got big aspirations in the league this season.

“What’s going to be important is how we bounce back. We lost our first league game and then won three in a row before our loss against Pirates.

What should encourage Furman is that they are yet to give away points at home this season having beaten both AmaZulu 1-0 and Chippa United 2-1 in their backyard.

“We will work on our mistake with the coach‚" he said.

"The run against Pirates was broken and we hope from the game against Leopards we can start another run.”

In the meantime‚ United coach Tembo has explained the reasoning behind pulling out veteran winger Thuso Phala in the 27th minute against Pirates.

“It was just a tactical change because they were playing with three at the back‚” said Tembo.

“I think we wanted to go and use that pocket of space on transition and Thuso was not really doing that.

“He was defending and tracking back a lot.

"I wanted to get the speed and I put in Fragrie Lakay to try and get beyond (Innocent) Maela and (Paseka) Mako.

“There were a lot of pockets in that area and we were really not capitalising.

"That’s why I brought in Fragie… it was just a tactical decision.”

SuperSport United coach Kaitano Tembo has questioned his charges' ability to eke out results under intense pressure and away from home after they ...
Sport
3 years ago
Next Article