I'll bring the best out of Phakamani Mahlambi - Pitso Mosimane 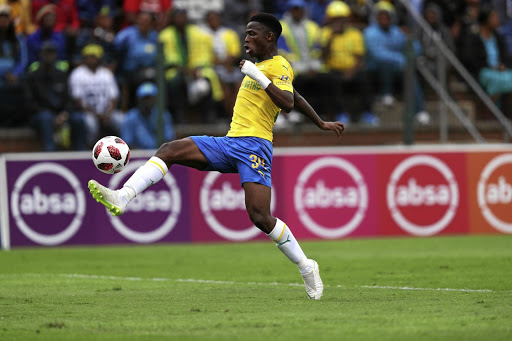 Mamelodi Sundowns' marquee signing Phakamani Mahlambi may have scored on debut in their enthralling 3-3 stalemate against AmaZulu on Sunday but the Brazilians coach Pitso Mosimane feels the former Al Ahly attacker is still "raw" and needs a lot of time to be a finished product.

"He's a good player, young and very raw. He needs a lot of work. He will spend a year or two with me. I think [by] then I will get a better product for SA," said Mosimane of Mahlambi, who joined Downs on the final night of the transfer window from Egyptian powerhouse Al Ahly for R13m.

The Brazilians mentor implied he wants to nurture Mahlambi the same way he did with Khama Billiat and Percy Tau, who have left Sundowns, saying they signed the former Bidvest Wits man to give them goals.

"He [Mahlambi] reminds me of Percy Tau when he came, even Khama [Billiat] a lot of work [was needed]. He did well [against AmaZulu], first game, first goal. He's supposed to score huh? That's why we brought him here," noted Mosimane.

As the defending champions, Sundowns have had an indifferent start to the campaign. They have won only one of their four league matches thus far, with three draws.

"We always start like things, so we are okay. You know what will happen at the end [indicating they usually finish stronger]. We are just three points behind our programme," Mosimane reiterated.

"We group our games into five per block, probably in the next phase we can get an extra three points that we have lost in the first phase."

Mosimane's troops face another KwaZulu-Natal side in the form of Golden Arrows at Princess Magogo Stadium on Wednesday (7.30pm).

"Probably it's going to be the same match as this [referring to their 3-3 draw against AmaZulu]. They have [Lerato] Lamola who is quick and powerful. They also have clever wingers who are good in one v one situations. They have been together as a group for a very long time. They have a good understanding," said Mosimane.