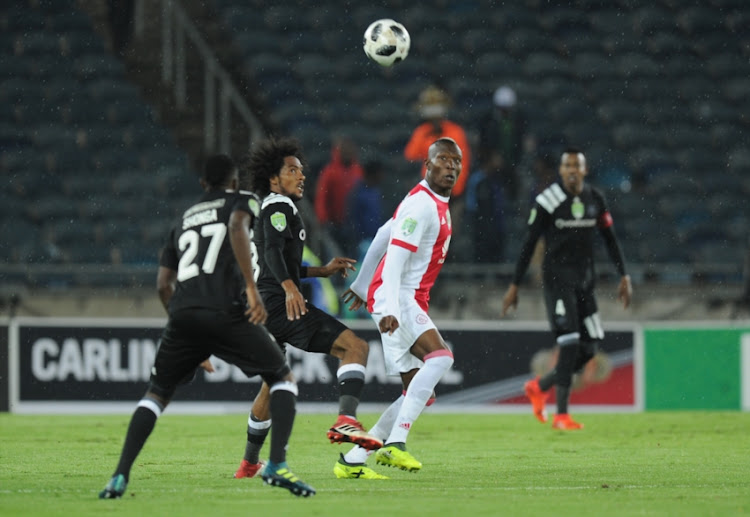 Issa Sarr and Justin Shonga of pirates in action with Tendai Ndoro of Ajax during the Nedbank Cup Last 32 match between Orlando Pirates and Ajax Cape Town at Orlando Stadium on February 10, 2018 in Johannesburg, South Africa.
Image: Gallo Images

Highlands Park coach Owen Da Gama has said that it's only a matter of time before the club announce the signings of Tendai Ndoro and Isa Sarr.

The former Orlando Pirates players are training with the Lions of the North and Da Gama said agreeing on suitable financial terms for both parties was the only outstanding issue.

It is now left to the club's management and the players' representatives to make the deals happen‚ said Da Gama.

"You know Tendai is a big player‚ there's no doubt about that.

"But a big player comes with a big price you know‚" Da Gama said after Highlands won their first match of the season with a 2-1 Absa Premiership home win over Lamontville Golden Arrows in Tembisa on Sunday.

"So at the moment it's now between the management and their agents and we'll see what happens. But I'd definitely like to have them in my team.

''Look Tendai is a player that can score goals and with his experience he'll certainly help us. But as I say it's no longer about football it's about money now.

"Every player has got a price. We'll wait to know what the situation is but I'm pretty sure a decision either way will be made soon‚" said the former Orlando Pirates coach.

Ndoro is a free agent after he was released by Ajax at the end of last season.

He was at the centre of a controversy between Ajax and the PSL‚ which resulted in the Cape Town club's docking of points and subsequent relegation for flouting Fifa rules after the player signed for a third club in a single season.

The Senegal-born Sarr recently received South African citizen ship and will be signed as a local should a deal go through.

"Sarr just started training with us on Thursday and we are allowing him to settle in‚" Da Gama said.

"We just want to bring in a little bit of experience to help us because as you know we brought in the bulk of the players who won us promotion in the NFD.

"We had to give them a chance."

But as I said before‚ as the technical team we can recommend but management will take the decisions at the end of the day.

"Unfortunately in the position that Abia Nale is playing in we've got a lot of players.

"But he's still a very good player and I'm sure he will find a team‚" said Da Gama.