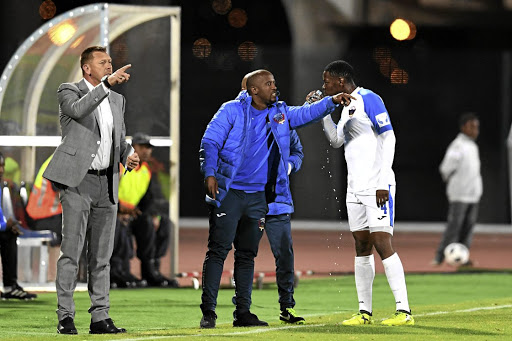 As a footballer, Chippa United assistant coach Vincent Kobola was the quintessential big brother in the dressing room.

Everybody gravitated towards him, which is why it is no surprise he immediately went into coaching after his retirement last month.

No wonder Cape Town City offered him a job in the club while Roger de Sa wanted him to be part of his new project at Cape Umoya United.

Club officials, coaches and former teammates speak highly of the former defender's leadership qualities. In the end he took the leap of faith to join the Chilli Boys after a sudden call from Eric Tinkler.

"It all happened within two days. Coach Eric called to say he wants me as his assistant and the rest is history," 33-year-old Kobola told Sowetan.

"It had been a long time coming because when I was a player Eric told me he would work with me when I retire.

"The trust Eric has for me is unbelievable and I will be forever grateful to him. The amount of support I have been getting from people has been overwhelming."

The former defender who was born in Polokwane can count himself among the few footballers to make the immediate transition from player to coach. Kobola has taken his new role in his stride but also admits it is a lot of work.

"Now I can feel that I am doing work. As players, you go train and then go home.

"Now I'm up early to check e-mails from the coach, then I have a look at the training programme.

"After training we have a session to address the progress of each and every player. Then we plan for tomorrow and look at the fitness of the players and those who are injured."

Kobola counts Steve Komphela, Muhsin Ertugral, Benni McCarthy, Innocent Mayoyo and Tinkler as the coaches who had the biggest impact on him in his 14-year career.

While Chippa owner Siviwe Mpengesi is notorious for firing coaches, Kobola says he's more focused on learning as much as he can.