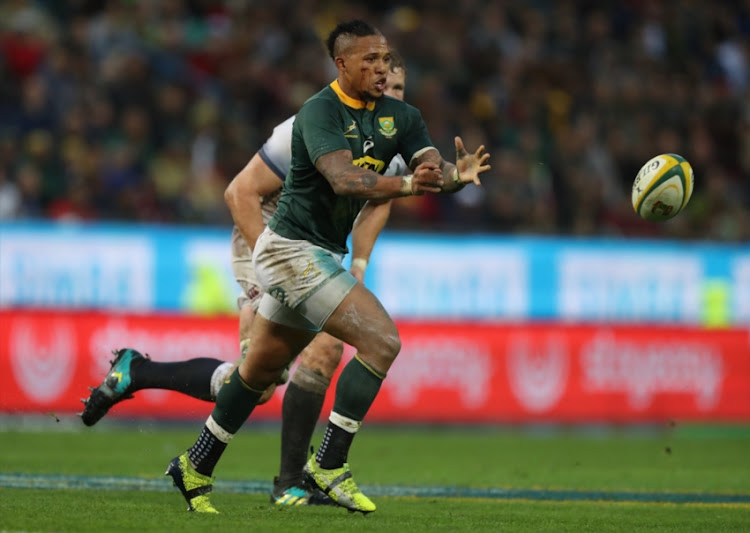 Springboks coach Rassie Erasmus was impressed with flyhalf Elton Jantjies' performance in the 23-18 Rugby Championship defeat to Australia after he was promoted to the starting line-up ahead of Handre Pollard on Saturday.

Jantjies scored eight points‚ including two penalties and one conversion‚ before he was replaced by Pollard just after the hour mark.

His performance will give Erasmus a good selection poser ahead of the showdown against the All Blacks in Wellington on Saturday.

“He did brilliant things at times and he kicked very well at the posts‚” said Erasmus.

“We will have to find the right combinations and find them quick enough because we know what the consequences are if we don’t do that.

Erasmus admitted that the Boks were uncomfortable in the wet conditions in Brisbane.

“Without a doubt we are uncomfortable in the wet conditions but a lot of guys are getting experience and we sometimes struggle with big match situations‚" he said.

"If it was raining or dry‚ we should have played the game better than we did.

“There was no rain during the match but there was a lot of dew and the ball was slippery and humid with the guys sweating a lot because it rained earlier.

"We both played on the same conditions and at times we created the spaces that we wanted but there was just a lack of concentration."

The Springboks were unlucky to have a try by Francois Louw disallowed by the TMO in the closing stages as they pushed to win the match.

Erasmus said even after watching the television replay he was still not sure whether there was a knock-on or not in the build-up.

“The TMO thought it was a double knock on‚ and to be honest with you I still don’t know if it was wrong because I was looking at it‚" he said.

"If it is a double knock-on then it was bad luck and I really could not see on that slow motion what happened there.

The South African coach also lamented his players' performances in the line-outs after they were outthought by the Australians in the department and he has asked for a better performance.

One of the glaring line-out mistakes was made by Bongi Mbonambi.

His overthrow fell in the path of Matt Toomua who easily scored Australia’s second try.

But Erasmus did not want to blame his hooker even after he replaced him with Malcolm Marx almost immediately after the error.

“Bongi has not played a lot and you can see that he was struggling‚" the Bok coach said.

"I have substituted the captain Siya a few times in the past and put another guy.

"It was not because of the overthrow that I replaced him because it was not his fault.”