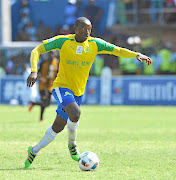 After struggling to taste top-flight football at Mamelodi Sundowns, forgotten midfielder Sibusiso Kumalo, 27, is determined to revive his career at Bidvest Wits, pinning his hopes on the Clever Boys' coach Gavin Hunt long
admiration for him.

Kumalo endured a torrid stay at the Brazilians, where he only played four games, since joining from Moroka Swallows in 2013. He joins Wits on loan until the end of the season with an option to buy.

"I will give my all at Wits. I am excited that now I have an opportunity to play first-team football. I have always been in contact with coach Hunt. He wanted me while I was still at Swallows," Kumalo, who still has two years remaining from his Sundowns deal, said.

"I have already had a few training sessions with Wits and the coach has shown me nothing but love. He [Hunt]
believes in me a lot. He's prepared to give me a chance. I am feeling positive..."

At Sundowns, Kumalo spent most of his time playing for the MultiChoice Diski Challenge team, as a result of a stiff competition in the first team with the likes of Tiyani Mabunda and Hlompho Kekana preferred ahead of him.

"I have never been scared of competition and I always fight. It was a pity that at Sundowns I did not play but I was not disappointed at all. I learnt a lot from my stay there... [it] toughened my character."

The lad from Katlehong, on the East Rand, hopes to play his first Premiership match in 17 months, when the league action resumes after the Fifa break, as Wits travel to Maritzburg United on September 15. He last featured in Sundowns' 1-0 win over Free State Stars on April 16 last year.